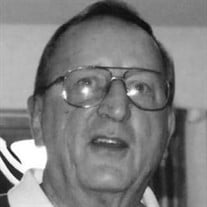 Alan L. Walters, age 88, of Wild Rose, WI, passed away on Wednesday, September 23, 2020. He was born July 31, 1932 in Wild Rose, WI; son of Elmer and Cora (Davies) Walters. Alan was a 1951 graduate of Wild Rose High School. He was an outstanding athlete in basketball and baseball. Alan was also active in bowling, softball and golf, which was his passion. Alan served his country during the Korean War as a military police officer in the U.S. Army from 1952 – 1954. On September 21, 1957, he married Carol A. Powell in Hancock, WI. Together they raised three children, Jeffrey, Jayne, and Rodney. Alan was employed at McGraw Central Plant in South Milwaukee for 11 years and then worked at Union State Bank in Wautoma for 31 years, retiring in 1997 as vice president. He served on the Wild Rose School Board for 9 years and also helped run Wild Rose Days for 17 years. From 1995 until his death he enjoyed helping the Salvation Army as a bell ringer. Alan is survived by his wife of 63 years, Carol Walters of Waupaca, WI; three children, Jeffrey Walters, Jayne (Bob) Hartman, and Rodney (Danna) Walters; nine grandchildren; and three siblings, Barbara, Patricia, and Ronald. He was preceded in death by his parents, Elmer and Cora Walters; two brothers, Richard Walters and Elmer Walters, Jr.; and a sister, Donna Hetzel. Per Alan’s wishes, no services will be held at this time. The Holly Funeral Home of Wild Rose is assisting the family with arrangements. “A friendly man who never met a stranger he didn’t like.”

The family of Alan L. Walters created this Life Tributes page to make it easy to share your memories.

Send flowers to the Walters family.