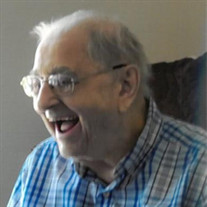 Allen Pohl, age 92, of Waupaca, passed away Tuesday, August 10th, 2021 at Bethany Home. He was born on October 25th 1928 in Almond, Wisconsin, to Harold and Edna (Lutz) Pohl. The family moved to a farm in rural Amherst, where Allen grew up, attending Riverview School, near the Waupaca/Portage County line, and Amherst High School, graduating in 1946. He enlisted in the U.S. Army and served with occupation forces in Japan, attaining the rank of corporal. Upon his discharge, he worked in a car factory in Milwaukee. On March 24th. 1951, he married Lila Lee in Amherst, and they lived in Stevens Point. Later that year they moved permanently to Waupaca. Allen worked for the Barnhart Machine Shop and joined the Waupaca Fire Department, where he served actively for over 40 years, retiring as 1st assistant chief. Later, he worked for the U.S. Post Office and eventually got a full-time job there as a rural mail carrier on Route 2 in Waupaca, where he worked until his retirement in 1986. Allen loved to deer and duck hunt and fish. He hunted ducks and geese in North Dakota until his 80th birthday. He fished in Canada annually with the Clark Street Canada Fishing Club for 50 years straight from 1967 to 2016. In 2008 he flew in to a remote lake, Obra, in the Canadian Northwest Territories, to fish lake trout, northern and grayling. Allen was a devout Christian. He was very involved in his church, serving Trinity Lutheran on the church council as well as in other capacities. He and Lila also served as missionaries for many consecutive summers, to the local population of Lynn Lake, Manitoba. He shot trap on the summer league for 31 years at the Waupaca Conservation League, where he was a life member. He worked in the concession stand for the Waupaca Lakemen Baseball Club for many years. Allen was a longtime member of Stratton's Drug Store Coffee Club. Allen liked to snowmobile, travel, and solve all sorts of mechanical problems. In his life he built four homes, built a power ice auger (before Jiffy), and made a revolving Christmas tree stand (with lights, think about it!). Besides Japan, he traveled to Canada, Mexico, Norway, Germany, Italy, Denmark and France. Allen loved time with his grandchildren and great-grandchildren. All of them benefited from time spent with him; he always taught them something. Allen is survived by his loving wife Lila, sons Mark (Hélène) Pohl of Ogdensburg, David (Mary) Pohl of Waupaca, and Douglas (Stephanie) Pohl of Waupaca, grandson Samuel Pohl of Milwaukee, granddaughters Melissa Pohl of Portage, Sarah (Steven) Elliott of Appleton and Nora (Regina) Pohl of Fort Collins, Colorado, and great grandchildren Lachlan Elliott, Ruby Young, and Corah Young. He is further survived by a sister, Lila (Dale) Mathwich of Sun Prairie and a brother-in-law, Gordon Lee of Scandinavia. A Memorial Service will be held at Trinity Lutheran Church in Waupaca at 1 PM on Thursday, August 19th, 2021, with Rev. Erin Coutts, officiating. Interment of cremains will be at Lakeside Memorial Park in Waupaca. Memorial Visitation will be held on Thursday from 12:00 (Noon) until the time of the service at Trinity Lutheran Church. Wearing of face coverings and physical distancing will be observed while in the church. In lieu of flowers, memorials can be made to Allen's church, Trinity Lutheran of Waupaca.

Allen Pohl, age 92, of Waupaca, passed away Tuesday, August 10th, 2021 at Bethany Home. He was born on October 25th 1928 in Almond, Wisconsin, to Harold and Edna (Lutz) Pohl. The family moved to a farm in rural Amherst, where Allen grew up,... View Obituary & Service Information

The family of Allen O. Pohl created this Life Tributes page to make it easy to share your memories.

Send flowers to the Pohl family.