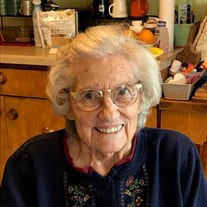 Audrey Helen Christensen, nee Lick, 87, town of Saxeville, Waushara County, died on 10/29/2021, peacefully at her home surrounded by her children. She was born on August 3, 1934 in Milwaukee, the daughter of Fred and Erna (Herrman) Lick, and spent her early years in Whitefish Bay. The family moved to Waupaca in 1946. Audrey graduated High School in 1952 as class co-valedictorian. She married Elwyn “Bud” Christensen on October 4, 1952, and they made their home at the Christensen homestead in the Town of Saxeville where they raised their family and spent their entire married life. Bud preceded her in death on June 14, 2004. In addition to being Bud’s helpmate and a homemaker, Audrey served as Saxeville Town Clerk and took great pride in co-authoring the history of Saxeville for their Sesquicentennial in 1998. She worked full time at Woody’s/Kraft Cheese Factory in Waupaca for 30 years. Audrey loved the Lord and served others as a tireless volunteer at Trinity Lutheran Church in Waupaca until the time of her death. She had a boundless love for her large family and found great joy in her abundant garden. She also had a deep interest in history and learning about people, which she nourished regularly through her interactions with others and through reading. Some of her most memorable times were spent fishing with Bud in Canada on their annual trips to Gummeson’s Camp on Mameigwess Lake. All in all, Audrey had a full and rewarding life! Survivors include: Daughter Jeanne (Dick) Writt, Clintonville, their children Elisha (Matt) Wagenson Bear Creek and children Lia and Jack; Mathew (Jessica) Writt, Taylors, SC and sons Elwyn and Everett; Paul (Laura) Writt Clintonville and sons Carter and Gavin; Tyler (Kayla) Writt, Lomira. Daughter-in-law Jeanne Christensen and children Mindy (Chad) Angsten, Waupaca and their children, Brecken, Reese and Chase; Tony (Julie) Christensen, Waupaca and their children, Jazmine, Jackson and Stella. Son-in-Law Eric (Grace) Dahle, North Barrington and daughter Mikayla. Daughter Jan and (Pat) Enright, Waupaca and son, Tanner Enright (Tanya, special-friend), daughters Desiree and Shyanna. Son Paul Christensen, Pine River and children Aaron Christensen (Sierra, special-friend), Hartfort, VT, Mollie Christensen, Madison and Levi. Sister-in-law Harriet Lick, special family friend Richard Washburn, many beloved nieces, nephews, god-children, and dear friends and relatives. Those who preceded her in death were: her parents, brothers Fred and Jim Lick, sister-in-law Lorraine Lick, sister Ellen (Robert) Eastman, brother-in-law and sister-in-law, Gary and Frieda Christensen, son Tom Christensen, daughter Julie Dahle and infant grandson, Baby Writt. A funeral service will be held on Thursday November 4, 2021 at Trinity Lutheran Church in Waupaca at 11 a.m. A visitation will be held on Wednesday November 3, 2021 at the Holly Funeral Home of Waupaca from 4 until 7 p.m., and again at church on Thursday from 10 a.m. until the time of the service at 11 a.m. with Pastor Andy Behrendt officiating. Burial will follow at the Crystal Lake Cemetery. Memorials may be made to the Trinity Lutheran Church, Waupaca. Closing words from Audrey for all: “I wish you all peace in your hearts and love for each other.”

Audrey Helen Christensen, nee Lick, 87, town of Saxeville, Waushara County, died on 10/29/2021, peacefully at her home surrounded by her children. She was born on August 3, 1934 in Milwaukee, the daughter of Fred and Erna (Herrman) Lick, and... View Obituary & Service Information

The family of Audrey H. Christensen created this Life Tributes page to make it easy to share your memories.

Send flowers to the Christensen family.