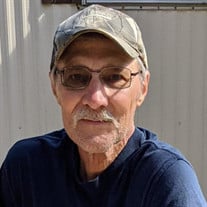 Barry Lee Merryfield, 68, of Wild Rose, WI, passed away peacefully early Thursday, March 24, 2022, at Cherry Meadows Hospice in Appleton, WI. He spent much of the previous day in his home surrounded by family. Barry was born December 5, 1953, in Milwaukee, WI, the son of Keith Merryfield and Joyce (nee Draves) Hildebrand. He was an accomplished athlete at James Madison High School in Milwaukee, where he lettered in football and wrestling and graduated from in 1972. Barry remained active in athletics well after high school, playing in various softball and football leagues. On November 30, 1974, he married his high-school sweetheart, Diane (nee Murray) Merryfield. An avid outdoorsman, Barry loved to hunt and fish. He did the bulk of his hunting in Wild Rose, WI, and traveled all over the country and to Canada on fishing trips. He was very supportive of his children and grandchildren in their athletics and attended many of their baseball, football, and basketball games. Barry took his painting apprenticeship with Ed Weber Painting, Inc., based in Mequon, WI. He spent the bulk of his career painting for the City of Milwaukee, retiring after 25 years of service. For extra income, which he referred to as “pin money,” Barry would often take on painting side jobs with private customers. He continued to earn his pin money long after retiring from the city. Barry is survived by his ex-wife, Diane; sons, Jeffry (Deanna) Merryfield and Eric (Sariah) Merryfield; grandchildren, Dylan, Ethan, and Penelope; step-grandson, Stephen Johnson; stepmother, Helen P. Merryfield; brother, Dennis (Judi) Merryfield; step-brothers, Gary (Jill) Hildebrand, Stan (Joann) Soltis, Gary Soltis, Jeff Soltis and Kevin Soltis; step-sisters, Cheryl (Scot) Sanderson and Karen (Robert) Wilson; numerous nieces and nephews; and many hunting and fishing buddies. He was preceded in death by his parents; step-father, Joseph Hildebrand and brother, Steven Merryfield. Memorial services will be held at Wild Rose United Methodist Church, located at 225 Summit St., Wild Rose, WI 54984 at 11:00am on Saturday, April 9, 2022, with Reverend Jill Nowlen officiating. Visitation will be held at the church on Saturday from 9:30-11:00 a.m., with the funeral service following immediately after.

The family of Barry Lee Merryfield created this Life Tributes page to make it easy to share your memories.

Send flowers to the Merryfield family.