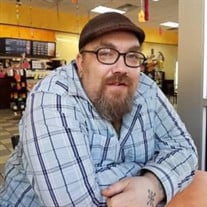 Benjamin (Ben) Mykel Bootz, 46, of Evanston, Illinois, formerly of Waupaca, passed away on Friday, April 16, at St. Francis Hospital in Evanston, following a month-long illness, with his brothers and mother by his side. Ben was born on July 12, 1974, in Newport News, VA, and moved many times before the family settled in Waupaca in 1979, just in time for Ben to start kindergarten. To describe Ben is to consider adventure, independence, humor, artistic ability, and love of family. Ben skateboarded before that was popular or even wanted around Waupaca, rode a unicycle in the 4th of July parade, motorcycled/camped around the southern United States, and loved deeply. His sense of humor was accompanied by his great grin and sparkling eyes. His paintings hang in many homes and we were always amazed that such big hands could make such lovely jewelry out of tiny beads. He earned a degree in welding from Moraine Park Technical College. From his mid-20’s Ben fought mental illness with strength and courage. We never heard him complain about his life or the strength it took to keep on going. He worked so hard to keep his independence and celebrated his Evanston apartments over the years, especially the one he moved into in January, with the Chicago metro going by many times per day. He loved pets and over the years he enjoyed cat buddies, a ferret named Lucky, and Norma, his current guinea pig. Ben is survived by his mother, Jeanne Bootz of Waupaca, his brother Andy (Angela) and their sons, Paxton, Hugo, and Jude of Monona, WI, his brother Dan (Jeanne Ryan) and their daughters, Esme and Lulu of Nelsonville, WI, uncles and aunts, Ross Turner, Jim and Barb Sanderfoot, Peter and Cathy Bootz, and Mary Law, cousins John (Kelli) Turner, Tara (Katena Roberts-Turner), Susan Sanderfoot, Jane (Gary) Gates, Kelly (Craig) VandenHeuvel, Kate Bootz, Kamy (Eric) Hopfensperger, Lisa (Jeff) Pribble, and many great nieces and nephews. He is also survived by amazing friends, who can and do share many Ben-adventure stories from over the years. Ben is preceded in death by his father, Bob Bootz of Waupaca, cousins, Annie Turner, John Sanderfoot, and John Law, his grandparents, John and Lulu Turner and Bud and Kate Bootz, and a great friend, Jeremy Carney. The family thanks the caring staff of Trilogy Behavioral Healthcare of Chicago for their caring support of Ben’s ability to remain independent. A private family graveside gathering will take place at a later date. The Holly Funeral Home of Waupaca is assisting the family with arrangements.

Benjamin (Ben) Mykel Bootz, 46, of Evanston, Illinois, formerly of Waupaca, passed away on Friday, April 16, at St. Francis Hospital in Evanston, following a month-long illness, with his brothers and mother by his side. Ben was born on July... View Obituary & Service Information

The family of Benjamin M. Bootz created this Life Tributes page to make it easy to share your memories.

Send flowers to the Bootz family.