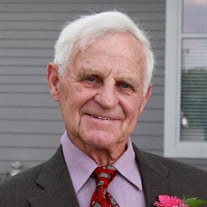 Bert E. Glodowski Jr., age 85 of Amherst, WI, passed away at home from complications due to Lewy Body Dementia on Friday, February 4, 2022. Bert was born on May 20, 1936 in Amherst, son of the late Bernard and Laura (Konkol) Glodowski. He graduated in 1954 from Amherst High School. On October 5, 1957, he married Mildred (Millie) Groholski at St. Mary’s of Mt. Carmel Catholic Church - Fancher. Bert was a proud military veteran. In the United States Army National Guard, he served during the 1961 Berlin Crisis stationed in the state of Washington with his good lifelong friends, Joe Sommers and Gusty Peplinski. His military assignment as a radio operator led him later in life to be an active ham radio operator. In the Air Force Reserves, Bert was also a crew chief on a C-130. He also volunteered for many years in the local Civil Air Patrol squadron. Bert developed his life-long strong work ethic growing up on the Glodowski family dairy farm (circa 1878) by Lake Ell around the block from Fancher church. He and Millie later purchased the farm in 1963. Bert and Millie continued to operate the farm milking cows and raising beef cattle, pigs, and chickens. He continued to operate it as a cash crop farm almost until his death. He was not one who understood the word “retirement”. Bert enjoyed the challenges of fixing his multiple tractors, bulldozer, dump trucks, combines, dragline, and classic farm machinery. Bert would find creative ways to fix just about anything. Farm auctions throughout the state caught his attention often. Bert’s largest passion was flying. He had over 6000 hours of flight time flying commercial for a variety of companies including Eastern, Midstate, and Zantop Airlines, and the DNR. He also worked in the air traffic control tower for many years in Green Bay. Bert built his own airstrip known as Lake L Airfield which was the homebase for his two aircraft, a Cessna 172 and a twin engine Beechcraft Travel Air. Besides farming and flying, Bert also provided for his family by working at multiple factories and other small jobs. Bert was an active musician in his youth including playing the trumpet in a polka band. Bert and his wife Mille enjoyed dancing the polka and waltzes at many Polish weddings and church picnics. They also enjoyed bowling, playing cards, going to Las Vegas, visiting local casinos, and traveling to visit family. One of their other favorite pastimes was attending their children’s and grandchildren’s various musical performances and sporting events. As a proud Amherst Falcon alumnus, Bert enjoyed watching all sports, especially baseball that he played in his youth. Bert was a private man with an amazing loyalty, love and dedication to his family and his land, especially the area around Lake Ell. He built their dream home there in 1976 with lumber that came directly from his own woods. He always loved discussing the surrounding wildlife and hunting with family. His cats and dogs provided Bert wonderful companionship. Bert’s goofy sense of humor and stories brought smiles and laughter to many. During family holidays he was always asking others to sing a song with him or dance a waltz. He indeed had the best musical voice in the family. Cards and a cribbage board were often close at hand. Bert is survived by his wife, Millie Glodowski of Stevens Point; children Alan (Grace Creveling) Glodowski of Naperville, IL; Jodi Glodowski of Amherst; Leda (Steven) Judd of Chippewa Falls; Dana Glodowski of Amherst; grandchildren Lauren and Brittany Glodowski, Aubrey and Anna Welke, Alex, Ryan, Sara and Aleah Breed; brother Ralph (Belvine) Glodowski; sister Lorriane Klinkert; sister-in-law LaVon Glodowski; Bert’s house cats and farm cats, and many other relatives and friends. Bert is preceded in death by his parents and brother, Norbert Glodowski. The family would like to give a special thank you to Helen Isenberger, Bert and Millie’s caregiver. Funeral Mass will be held at 11:00 AM on Friday, February 11th at St. Mary of Mt. Carmel Catholic Church – Fancher. Visitation will be held from 4:00 PM until 6:00 PM on Thursday, February 10th at Jungers-Holly Funeral Home in Amherst with a Rosary Service at 6:00 PM. Visitation will also be held on Friday from 10:00 AM until time of Mass at the Church. In lieu of flowers, memorials in Bert’s name are appreciated to the Portage County Humane Society and the Alzheimer’s Association. Online condolences available at www.hollyfuneralhome.com

Bert E. Glodowski Jr., age 85 of Amherst, WI, passed away at home from complications due to Lewy Body Dementia on Friday, February 4, 2022. Bert was born on May 20, 1936 in Amherst, son of the late Bernard and Laura (Konkol) Glodowski. He graduated... View Obituary & Service Information

The family of Bert E. Glodowski Jr. created this Life Tributes page to make it easy to share your memories.

Send flowers to the Glodowski family.