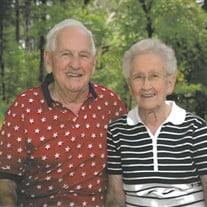 Beverly (Bev) June Whitman, age 92, of Waupaca, passed away, from complications of COVID-19, on Saturday June 13th, 2020 at Bethany Home. She was born on June 21st, 1927, in the Town of Hancock, Waushara CO., WI. Beverly was the youngest of 6 children born to the late Sigfrid and Mable (Davis) Person. Her siblings were Ernest Person, Cecil Person, Dorothy (Person) Krueger, Delbert Person and Stanley Person. Beverly grew up during the Great Depression. Her family moved many times - going to wherever her father, Curly, could find seasonal work. Beverly often said she attended many one room school houses, which she loved and honored, until she attended the big city of Hancock High School. This is where she met the love of her life, Robert Whitman, on her first day of their freshman year. After high school, Beverly, and her sister Dorothy, moved to Lake Geneva, WI, to work at the Chaney Manufacturing Company making precision instruments for the War effort. She was very proud of her work at Chaney. During her tenure there, Beverly was awarded the coveted "E-pin", which she was very proud of thru her last days. After Robert returned to Hancock from WWII, they married on September 30th, 1950. Beverly and Robert moved to Waupaca where, together, they owned a Standard Oil Service Station and later, Bobs Distributing. During these years, Beverly raised 4 children all while; managing the businesses, driving school bus (including taking the WHS marching band to Winnipeg, Can), leading Cub Scouts, working in the Waupaca City Offices, and at Waupaca Memorial Hospital - which she rode her bike to for years. After retiring, she volunteered over 20 years at the WI Veterans Home - working in the Marden Center Coffee Shop and making many friends. She was an active member of the VFW Womens Auxiliary for many years. Bev loved attending the USS Drexler Reunions and sharing memories of her brother-in-law Marvin. Beverly was also a life member of the Waupaca Fire Department's Auxiliary. Bev and her best friends were in a card club for over 30 years. She was in a bowling league, and had a green thumb for the beautiful flowers surrounding her home. She attended Trinity Lutheran Church until moving to the United Methodist Church in the mid 1960's. She was a tireless craftswoman, which earned her many blue ribbons at the Waupaca County Fair. In her 70's, Beverly wrote a cookbook of her most popular recipes that were time tested by her family. She made copies for each and every child and grandchild. She also took up painting again, becoming a "Grandma Moses" of Waupaca. Her artwork is beautiful and most recently won several awards in the Bethany Residence Care staff and resident Art Show. Beverly always had a smile in her eyes and a song in her heart. Her favorite songs were "Whistle While you work" and "What a Friend We Have in Jesus". As much as she struggled with health issues in her last years, she tried to see the sunny side of things and treasured her memories. All holidays were spent at grandma's and we were always so excited to spend them there. Beverly was also a 31 year survivor of breast cancer. Survivors include her husband, Robert Whitman, Waupaca, WI, her children; Rick (Michelle Kozlow) Whitman, Livingston, MT; Marvin (Rhondalyn) Whitman, Menomonie, WI; Charles (Cynthia) Whitman, Waupaca, WI; Diane (Herb) Shaver, Denver, CO; nine grandchildren and 9 great-grandchildren (with one more on the way) as well as many nieces and nephews. She was preceded in death by her parents and all of her siblings. A Memorial Service will be held on September 30, 2020 at 6:00 PM at the Holly Funeral Home in Waupaca. Memorial Visitation will be held on Wednesday, from 4 PM until the time of the service at the funeral home. Interment of Cremains will be held at Central WI Veterans Memorial Cemetery, Town of Farmington, Waupaca Co., WI. The family would like to extend a special "Thank you" to Linda Gardner, Hope McIntyre and all of the staff at Bethany Home for their kind and compassionate care. The family would also like to thank the Holly Funeral Home for assisting with arrangements. In lieu of flowers, please make a donation in Bev's name to either Breast Cancer Research, the Alzheimers Association or a charity of your choice.

Beverly (Bev) June Whitman, age 92, of Waupaca, passed away, from complications of COVID-19, on Saturday June 13th, 2020 at Bethany Home. She was born on June 21st, 1927, in the Town of Hancock, Waushara CO., WI. Beverly was the youngest of... View Obituary & Service Information

The family of Beverly "Bev" J. Whitman created this Life Tributes page to make it easy to share your memories.

Send flowers to the Whitman family.