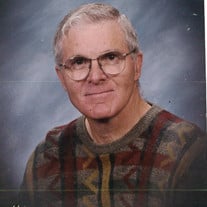 Brian DeRoche, age 77, of The Villages, FL., formerly of Waupaca, WI. passed into heaven on Wednesday, January 15, 2020. He was born Dec. 16, 1942 to Robert H. DeRoche and Marion Tonn DeRoche in Marquette, MI. He was the eldest of 5 children. Raised in Marquette, MI. he graduated from Northern Michigan University and moved to Milwaukee WI. Where he worked as a systems analyst for The Northwestern Mutual Life Insurance Company. It was there that he met his wife Maryann. She baked him a “cherry pie” and the rest was history for 55 years. Brian was most proud of his two children, Christopher Thomas DeRoche (Melanie Attig) of Waupaca, WI and “Sam” Sandra Jean DeRoche of Stevens Point, WI. Sam is the mother of his 3 grandchildren. They have enriched his life and brought him joy, Ian Escher Vierck, Lettie Angela Vierck and Katiya Grace Gorski were an important part of his life. While raising Tom and Sam, he was a Cub Scout Leader and while living in Kenosha, WI. He taught basketball and coached at the CYC. Florida became his new home following a second career as a home contractor in Waupaca, WI. Paul Saurer a friend and co-worker will miss Brian. In The Villages Brian was active in golf, tennis and pickle ball. He made many friends. Brian is survived by His Loving Wife Maryann, Children, Grandchildren, Brothers Sisters, Many nieces and nephews. His Sisters: Robyn (Fred) Molby, Trish Cook both live in the Greater St. Petersburg area; Brothers: Richard (Lynda) DeRoche, of Arizona; Jim DeRoche, Chicago, IL; Maryann’s Sister: Claudia (Ron) Kirmsse, Wisconsin; Brothers: Lawrence (Lynn), Charles and John (Kathy) Burzynski; Special friends: Edwin and Joy Hatch sat endless hours with hospice. Ed was Brian’s closest friend and fishing buddy for over 53 years. Diane and Gerry McCann his pinochle card friends for fifty years. Tom and Kristin Werging who were kind and loving neighbors. Angela and Tony Arrigo who we met golfing and became dear to us. Don and P.J. Stipanic whose Love and company Brian enjoyed and many others. Services will be held in Waupaca, WI. A Celebration of Life Mass will be held at St. Mary’s Magdalene Catholic Church on Saturday, January 25, 2020 at 11:00 a.m. with a visitation from 10:00 to 11:00 a.m. prior to the Mass, followed by a luncheon and fellowship at noon. A Celebration of Life in The Villages will be held at a later date and will be announced online. Brian’s beautiful guitar music will now cease and his guitar, made by Edwin Hatch, will be retired. Arrangements entrusted to Holly Funeral Home of Waupaca. Online condolences available at www.hollyfuneralhome.com

Brian DeRoche, age 77, of The Villages, FL., formerly of Waupaca, WI. passed into heaven on Wednesday, January 15, 2020. He was born Dec. 16, 1942 to Robert H. DeRoche and Marion Tonn DeRoche in Marquette, MI. He was the eldest of 5 children.... View Obituary & Service Information

The family of Brian DeRoche created this Life Tributes page to make it easy to share your memories.

Send flowers to the DeRoche family.