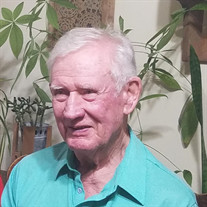 Bruce W. Stevens, age 89, passed away Monday, December 23, 2019. Bruce was born July 30, 1930 in Waupaca, Wisconsin. He married Shirley Schmit on September 22, 1954. Survivors include his wife Shirley; six children: Symantha Stevens, James Stevens, Jerry Stevens, Sally (Mark Flora) Stevens, Don (Laurie Pagel) Stevens, and Sue (Dave) Hale. Further survived by 2 brothers; Lawrence Stevens and Bill (Karen) Baehr, 8 Grandchildren: Jessica (Lance) Nenning, Sam Stevens, Miranda Flora, Jennifer (Joseph) Chancellor, Heather Hernandez, Jeremiah Stevens, Alisha Stevens, and Johnny Williams; 12 Great-Grand Children; 1 Great-Great Grandchild and many other family, friends and neighbors. Bruce was preceded in death by his parents: Bruce Stevens Sr., Carol (Mumbrue) Baehr, son Dale Stevens, sisters-in-law Elaine Stevens and Marilyn Dombrowski brothers-in-law Frank Dombrowski and Earl Hoffman, and grandson Tyler Stevens. Bruce was a veteran of the U.S. Army serving from 1948 – 1952, during which time he was deployed to Korea with the 62nd Engineer Construction Battalion during the Korean Conflict. After returning home, Bruce completed a long career as a Mechanical Engineer with the Menasha Corporation, which holds patents based upon his engineering designs. While his interests were wide and varied, they often focused upon his love of being outdoors. Bruce maintained a meticulous garden, which provided fruits and vegetables for all of his extended family, many of his neighbors, as well as regular donations to the Waushara County Food Bank. He spent a lot of time in the woods clearing trees, cutting fire wood, hunting deer and gathering mushrooms. He and his wife Shirley took daily dog walks with their buddies, Kai and Sam, through the woods and around the neighborhood in all but the most inclement weather. As an avid naturalist, he passed along his extensive knowledge of the local fauna and flora to his children, grandchildren and anyone who would accompany him on his forays into the woods. In his younger years, Bruce was a competitive pistol and rifle shooter, and is an honorary life member of the Appleton Rifle and Pistol Gun Club. Perhaps his greatest accomplishment was passing down a legacy of hard work and a strong work ethic to his children and grandchildren. He will be missed! The family requests that in lieu of flowers, donations be made in Bruce’s memory to your favorite charity. A celebration of life will be held on Saturday January 4, 2020 at St. Mark’s Episcopal Church 415 S. Main St. in Waupaca from 10 A.M. until 12 noon followed by Military Honors and then a luncheon. The Holly Funeral Home of Waupaca is assisting the family with arrangements.

The family of Bruce W. Stevens created this Life Tributes page to make it easy to share your memories.

Send flowers to the Stevens family.