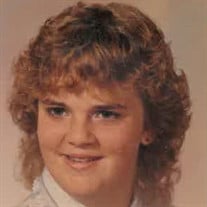 Caroline Marie “Carrie” Eastman, age 56, of Almond, WI, passed away on Thursday, December 16, 2021 after a courageous 4-month battle with brain cancer. She was born on February 2, 1965 in Wild Rose, WI, daughter of Franklin and Judith (DeBruin) Eastman. Caroline graduated from Almond High School in 1983, after graduating she worked in Milwaukee, WI, Watertown, WI, Plover, WI and in Stevens Point, WI for the past 11 years until moving back to Almond, WI 4 months ago. She loved to read, draw, paint and do various craft projects and play games. She is survived by her mother, Judith Eastman; one sister, Patricia (Wally) Tomczak; one brother, Timothy Eastman all of Almond, WI; four nephews, Andrew (April) Gneist, Jesse (Deana) Gneist and baby Gneist to be, Christopher Eastman and Brandon Eastman; many aunts, uncle, cousins and many friends. She is preceded in death by her father, Franklin Eastman; two Infant brothers, Daniel and Edward Eastman and an aunt and an uncle. Funeral services will be on Tuesday, December 21, 2021 at 1:00 pm at Almond United Methodist Church in Almond, WI with Rev. Grace Eunhye Cho officiating. Burial will be in the First Belmont Cemetery in the Town of Belmont. Friends may call on Tuesday from 11:00 am until the time of services at the church.

The family of Caroline "Carrie" Eastman created this Life Tributes page to make it easy to share your memories.

Send flowers to the Eastman family.