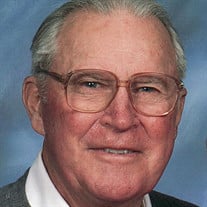 Clarence O. Riddle, age 98, passed away on Tuesday, November 19, 2019 at Cherry Meadows Hospice in Appleton. Clarence was born in Swea City, Iowa on January 2, 1921, the son of the late Clarence O. and Mabel (Godfredson) Riddle Sr. He later moved to Burt, Iowa where he graduated from high school. He graduated from Upper Iowa University where he participated in sports and also received the honor of being selected Who's Who in American Universities and Colleges. He received his Master's Degree from the University of Wisconsin-Madison. He served 2 years in the Navy & 2 years in the Marine Corps during WW II. Two of the four years in the service were spent in the South Pacific while serving with the Marine Corps. During the time he was overseas, he earned the American Campaign Medal, the Victory Medal, the Asiatic Pacific Area Campaign Medal with 3 stars indicating 3 major campaign battles. He also received the Bronze Star and the Silver Star. On June 21, 1947, Clarence married Edna Pethke in Manawa and she preceded him in death on April 13, 2008. He taught and coached all sports in Coggon, Iowa for 5 years. They then moved to Waupaca where he taught and coached for 5 years and later served as the High School Principal for 26 years. Clarence retired in 1983. Other activities centered around his family, whom he loved dearly. He was an ardent sports fan, especially baseball, and loved to play golf & fish. After retiring, Clarence & Edna spent the winter months in Arizona. Clarence is survived by his sons: Richard (Connie) Riddle, Appleton and Dennis (Suse) Riddle, Scandinavia; his grandchildren: Trisha (Steve) Lange, Appleton; Chad (Katrina) Riddle, Appleton; Anne (Jason Bougere) Riddle, Washington D.C.; and Jeffrey Riddle and significant other, Jenna Miller, Madison and his great grandchildren: Evan & Erica Lange and Ellie & Charlotte Riddle. Clarence was preceded in death by his parents, his wife Edna, 2 brothers, Raymond & Darrel and 4 sisters, Viola, Ruth, Ruby & Wilma. Funeral Services will be on Monday, November 25 at 11 AM at Trinity Lutheran Church, Waupaca with Pastor Andy Behrendt, officiating. Full Military rites will be at church and burial will take place at Union Cemetery, Symco. Visitation will be on Sunday evening from 4 to 7 PM at the Holly Funeral Home in Waupaca and also on Monday morning from 10 AM until the time of services at the church.

The family of Clarence O. Riddle created this Life Tributes page to make it easy to share your memories.

Send flowers to the Riddle family.