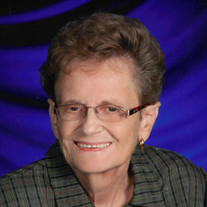 Our much-loved wife, mom, grandma and great-grandma, Cleo M. Bellin of Waupaca, passed away on Monday, November 15th, 2021. She was at home with family at her side. She was born December 7, 1941, in Algoma, WI, the daughter of Vital and Bernice (Greenwood) Coppersmith. Cleo married her high school sweetheart, Giles Bellin, on September 19th, 1959, at St. Mary’s Catholic Church in Algoma, WI. They enjoyed 62 years of adventures together and raised 5 children. She worked as a bookkeeper at Ron & Lloyd’s/Pick N Save until her retirement in 2007. Cleo made 8 different houses into homes for her young family, as they moved to different locations in Wisconsin and Upper Michigan, settling in Waupaca in 1974. She took loving care of dad, all of us, her grandkids, and aging parents. She also cared for infant foster children and was reunited with one of these special “babies” in recent years. Upon entering her house, we were often greeted by the wonderful smells of her cooking and enjoyed many Sunday and holiday dinners, weekend cookouts, Christmas cookie baking sessions, and her home-made caramels, pies, and other special treats. Mom and dad enjoyed many trips together within the United States and abroad. Mom enjoyed many special times with her family and friends. She enjoyed watching her Wisconsin teams – Packers, Brewers, Bucks, Badgers, and local teams when her kids and grandkids played. She was an avid knitter and knitted many hats, mittens, slippers, afghans and Christmas stockings and kept the entire family stocked with dishcloths and scrubbies. She also enjoyed bowling, playing cards, watching the hummingbirds and cardinals in her yard, and dancing with Giles (especially Polkas!). Amid all the chaos of life she was our rock and we will miss her so much. When she entered hospice, they asked about any wishes she had. It was comforting to hear her say she had been blessed and there was nothing she wanted to do that she hadn’t done. She is survived by her husband Giles; her children John (Adrianna) Bellin, Mary (Robin) Burns, Danny (Mary) Bellin, Teresa (Steve) Brown, and Joe (Nikki) Bellin; grandchildren Christine (Chad) Bork, Josh Bellin, James Burns, Tricia (Jesse) Irvin, Raymie Burns, Angela (Jonathan) Shimko, Matt (Katie) Bellin, David Bellin, Ashley Brown (fiancé Eli Wood), Megan Brown (Zach), Cole Bellin, and Suzie Bellin; and 14 great-grandchildren. She is also survived by her brother Lloyd (Diane) Coppersmith; sister Donna Thome; brothers-in-law Gary (Karen) Bellin, Bernie (Trudi) Bellin, Ron (Marsha) Bellin, Randy (Deena) Bellin; sisters-in-law Karen Coppersmith, Jeanette Coppersmith, Kary Coppersmith, Pat Bellin, Sherry Bellin, and Patty Bellin; and by many special nieces, nephews, and friends. She was preceded in death by her parents; in-laws Ervin and Genevieve Bellin; brothers Philip Coppersmith and Donald Coppersmith; brothers-in-law Ron Thome, Glenn Bellin, Ernie Bellin, and Bob Bellin; infant grandson Austin Burns; nephews Paul Coppersmith and Brian Flavion; and niece Lori Flavion. A Memorial Visitation will be held at Holly Funeral Home in Waupaca on Friday, November 19th from 4:00 – 7:00 PM. A Memorial Visitation will also be held on Saturday, November 20th from 10:00 – 11:00 AM at St. Mary Magdalene Catholic Church in Waupaca followed by the Memorial Mass at 11:00 AM with Father Xavier Santiago, presiding. Inurnment will be in St. Mary’s Catholic Cemetery in Algoma, WI, at a later date. In lieu of flowers a memorial will be established in Cleo’s memory. The Holly Funeral Home of Waupaca is assisting the family with arrangements. Special thanks to ThedaCare at Home Hospice for helping us take good care of mom. Thanks for EVERYTHING mom. We love you!

Our much-loved wife, mom, grandma and great-grandma, Cleo M. Bellin of Waupaca, passed away on Monday, November 15th, 2021. She was at home with family at her side. She was born December 7, 1941, in Algoma, WI, the daughter of Vital and Bernice... View Obituary & Service Information

The family of Cleo M. Bellin created this Life Tributes page to make it easy to share your memories.

Send flowers to the Bellin family.