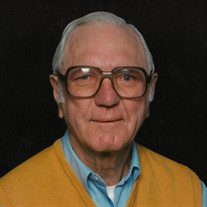 Dalton (Del) August Fleege, age 98, of Waupaca, WI, peacefully passed away on Monday, July 27, 2020 at Park Vista – The Legacy in Waupaca, WI. Del was born in Thorp, WI to the late August and Caroline (Ripperda) Fleege. In his early childhood, the family moved to Cuba City to take up farming. Always athletic, Del was named All-Conference High School in Football, garnering the nickname “Speed”. In July 1944, he married his high school sweetheart, Margaret (Peg) Hansen. Their 61 years of marriage brought occasion to move 33 times across the country. She passed away in 2006. Del was a veteran of both WWII and the Korean Conflict, first as a Naval pilot flying fixed wing aircraft and then as a U.S. Marine Captain flying helicopters in Japan. Following his honorable discharge from military service, he enrolled at UW-Madison, graduating Suma Cum Laude in 1952 with a degree in chemistry. His career in the food industry began and ended with Kraft, Inc. He retired in 1984 from a senior management position. Prior to retiring, he and Peg spent weekends at their summer home on Fence Lake in Lac du Flambeau, WI. That love of water life took them to their final home on Spencer Lake in Waupaca. Both locations brought out the grill, ski boat, volleyball net and grandchildren for many memorable, wonderful family gatherings. Del enjoyed traveling, searching for those “out of the way places” in China, Japan, Portugal, Spain, Morocco and often, northern Mexico. After retirement, he and Peg could often be found in their motor home, traveling the country and exploring the national parks. He was a man of inexhaustible energy as he pursued his many hobbies and interests, including biking, card playing, waterskiing, the Green Bay Packers and the Wisconsin Badgers. He and Peg loved music, notably dancing and singing. An enthusiastic golfer, he played extensively during the summers in Wisconsin and winters in South Texas. A selfless volunteer, Del offered his time to many causes, including but not limited to helping neighbors with a myriad of tasks, working in special education programs in South Texas, providing Meals on Wheels, ringing the Salvation Army Christmas bell, and helping at the Veterans’ Home in King. He and Peg also served as hosts in national forest campgrounds in Florida. Del was a member of St. Mary Magdalene Catholic Church and a past member of the VFW Post #1037 in Waupaca, the Elks Club and the Knights of Columbus. He always proclaimed that his greatest accomplishments were his family, earning his flight wings, his hole-in-one on the links and skydiving at age 90! Del is survived by his children, Madge (Woody) Bishop of Stevens Point, WI, Dru Peters of Stevens Point, WI, Drake (Kathy) Fleege of Hartford, WI, and Clark (Judy) Fleege of Boise, ID; six grandchildren; thirteen great-grandchildren; and further by nieces, nephews, other relatives and friends. Del will be buried following a private family ceremony at St. Mary Magdalene Catholic Cemetery in Waupaca, WI. In lieu of flowers, donations can be made to St. Jude’s Children’s Research Hospital or a charity of choice. The family extends their gratitude to the Park Vista staff for their care and the Holly Funeral Home for their assistance.

Dalton (Del) August Fleege, age 98, of Waupaca, WI, peacefully passed away on Monday, July 27, 2020 at Park Vista &#8211; The Legacy in Waupaca, WI. Del was born in Thorp, WI to the late August and Caroline (Ripperda) Fleege. In his early... View Obituary & Service Information

The family of Dalton A. Fleege created this Life Tributes page to make it easy to share your memories.

Send flowers to the Fleege family.