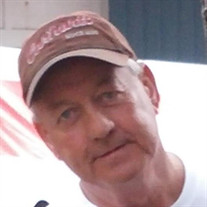 Daniel (Danny/Banjo) Anderson, a life-long resident of Wild Rose, died peacefully in his home on February 12th, 2022. He passed in the presence of his family. Dan was diagnosed with brain and lung cancer in November of 2021 and suffered a severe burn accident in December of 2021, which ultimately took his life. Dan is survived by his wife, Cindy Anderson of Wild Rose, WI; his sons, Christopher (Beth Wagner) Anderson of Menasha, WI and Nathan Anderson of Kaukauna, WI; his sister, Shirley Kitchen of Beaver Dam, WI; his nieces Dana Kitchen and Dawn (Jim Nicholson) Kitchen and their children; and his cat, Effie. He is preceded in death by his father, Harry Anderson; mother, Bernice (Heller) Anderson; his brother, Lee (PZ) Anderson; and brother-in-law, Jeff Kitchen. Dan was born on December 3rd, 1950 at Wild Rose Hospital to Harry and Bernice (Heller) Anderson. After tragically losing his father in a farm accident in 1970, Danny - just a young man at the time - started full time work to support the family. He became a truck driver and committed to a grueling schedule - long hours and long distances - for the rest of his life. He was employed by USF Holland Freight as a member of the International Brotherhood of Teamsters, Local 662. His work ethic was completely selfless - having come from such modest beginnings, he simply worked harder than most in order to be able to provide the best of everything to his family. Danny’s commitment to family continued after marrying his true love, Cindy, and having two sons, Christopher and Nathan. He purchased the then heavily dilapidated farm on which he grew up and replaced each building, culminating with building a new home on the farm in 2003. Danny loved his family deeply and it was reciprocated - they went on their annual vacation to the Minnesota State Fair even when his sons were adults. Danny proudly referred to Chris and Nathan as “the boys” long after they were already men, following in the footsteps he made with his strong work ethic and family focus. Danny loved the holidays - like a kid does. His love of a big farm-sized meal (with two desserts!) surrounded by immediate and extended family, sharing his wry sense of humor (and his unique gift ideas with his grandnephews) made the holiday spirit infectious. His dream was to see one more Christmas and his absence at future Christmases will be felt deeply. A Memorial service will be held Sunday, February 20, 2022 at 1:00 p.m. at A. J. Holly Funeral Home in Wild Rose, 630 County Highway GH, Wild Rose, WI 54984. Visitation to be held Sunday, February 20, 2022 from 11:00 a.m. until the time of service at the funeral home. In lieu of flowers please consider donating to your local humane society in Danny’s name.

Daniel (Danny/Banjo) Anderson, a life-long resident of Wild Rose, died peacefully in his home on February 12th, 2022. He passed in the presence of his family. Dan was diagnosed with brain and lung cancer in November of 2021 and suffered a severe... View Obituary & Service Information

The family of Daniel A. Anderson created this Life Tributes page to make it easy to share your memories.

Send flowers to the Anderson family.