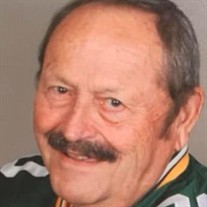 Daniel H. Merryfield, age 78, of Wild Rose, WI, moved on to his next great journey on Friday, January 21, 2022. He was born August 10, 1943 in Wild Rose, WI; son of Howard and Martha (Lee) Merryfield. Dan served in the U.S. Navy from October 12, 1961 until he was honorably discharged on January 28, 1966. On April 27, 1963, he married Sharon A. De Bruin at St. Therese Catholic Church in Appleton and together through the years they raised three wonderful sons. Dan was a lifelong electrician working for the IBEW Local 577. He had a delightful sense of humor and enjoyed interacting with people wherever he went. Both himself and Sharon were part of the singing group the “Happy Wanderers” from Kaukauna and they traveled all over the United States sharing their music with others. He loved to watch the Packers play and was an avid hunter and fisherman, enjoying his time outdoors. Dan will be dearly missed by all of his loving family and friends. Dan is survived by his loving wife of almost 59 years Sharon Merryfield of Wild Rose; three sons Todd (fiancée Lisa Hendrix) Merryfield of Port Washington, Troy (Deborah) Merryfield of Suffolk, VA, and Tom (special friend Deb Hallett) Merryfield of Watertown; grandchildren Tracy (Tyler) Weiher of Waukesha, Taylor Merryfield of Milwaukee, Tom (special friend Alyssa Murray) Merryfield of Greendale, Grace and Rebecca Merryfield of Suffolk, VA, Andrew (special friend Rachael Breyer) Merryfield of Fort Atkinson, and Sam (special friend Hannah Dorshorst) Merryfield of Madison; two great-grandchildren Lyla and Reid Weiher; and also by several brothers-in-law, sisters-in-law, nieces, nephews, other relatives and many friends. He was preceded in death by his parents Howard and Martha Merryfield, and one sister and brother-in-law Dixie (Albert) Edgren. A Celebration of Dan’s Life will be on Saturday, February 12, 2022 at 12:00 Noon at the Waushara Community Church, N2126 22nd Avenue, Wautoma, WI 54982. Pastor Al Spitler will officiate. A visitation will be held on Saturday morning from 11:00 AM – 12:00 PM at the church. The Holly Funeral Home of Wild Rose is assisting the family with arrangements.

Daniel H. Merryfield, age 78, of Wild Rose, WI, moved on to his next great journey on Friday, January 21, 2022. He was born August 10, 1943 in Wild Rose, WI; son of Howard and Martha (Lee) Merryfield. Dan served in the U.S. Navy from October... View Obituary & Service Information

The family of Daniel H. Merryfield created this Life Tributes page to make it easy to share your memories.

Send flowers to the Merryfield family.