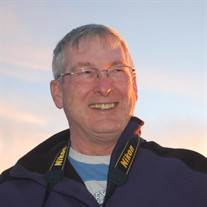 Dean B. Struble, age 73, of Amherst, WI, formerly of Beaver Dam and Neillsville, passed away unexpectedly on Sunday, June 27, 2021 at his home in Amherst. Dean was born on September 9, 1947 in Neillsville, WI; son of Chuck (Lawrence) Struble and Alice (Moen) Linderman. Dean married Carla K. Dern in Neillsville, WI on June 29, 1969, relocated to Beaver Dam, and taught math to middle school and high school students there for 34 years. After retirement in 2007, Dean and Carla relocated from Beaver Dam to Amherst to be near their children and young grandchildren. Dean and Carla were classmates in primary school, high school sweethearts, and devoted husband and wife for 52 years. After retirement and moving to Amherst, they loved spending time with their family and friends, time at the cabin, and traveling the world with wonderful trips to Hawaii, Alaska, Costa Rica, Germany, Italy, and Australia/New Zealand. Their only regret is that there were so many trips yet to take. One of the things that defined Dean was how generous he was with his time and energy to family, friends, and the community. He was never one to point out that something needed to be done; he would simply dig in and do it. “Doing things together” was a hallmark of how Dean showed and shared his love. Dean was an almost daily fixture in the lives of his children and grandchildren; the holes left in their lives and hearts with his passing cannot be filled. He particularly loved doing projects with his sons and the feeling of accomplishment at the end of the day. He will be dearly missed by all of his loving family and many friends. Dean is survived by his loving wife of 52 years, Carla Struble of Amherst; two sons, Shad (Patricia) Struble of Amherst and Brent (Jacqueline) Struble of Junction City; six grandchildren, Jakob Struble of Amherst, Megan Struble of De Pere, Nathan Struble of Amherst, Nolan Struble of Amherst, Wyat Struble of Junction City and Kylie Struble of Junction City; sister-in-law, Mary Dern of Wis. Rapids, and also by other relatives and friends. He was preceded in death by his parents, Lawrence Struble and Alice Linderman, and a sister, Barbara Struble. A visitation will be held on Thursday, July 1, 2021 from 10:00 am - 12:00 noon at the Amherst United Methodist Church, 163 Laconia Street, Amherst, WI 54406, followed by a memorial service starting at 12:00 noon. Pastor Kari Riley will officiate. In lieu of flowers, a memorial is being established in Dean’s name. The Jungers-Holly Funeral Home of Amherst is assisting the family with arrangements.

Dean B. Struble, age 73, of Amherst, WI, formerly of Beaver Dam and Neillsville, passed away unexpectedly on Sunday, June 27, 2021 at his home in Amherst. Dean was born on September 9, 1947 in Neillsville, WI; son of Chuck (Lawrence) Struble... View Obituary & Service Information

The family of Dean B. Struble created this Life Tributes page to make it easy to share your memories.