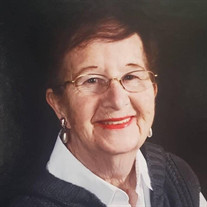 Delores M. Johnson, 79, passed away peacefully at home after a courageous battle with cancer. She was born on April 17, 1941, to John and Gertrude Zawacki. She married Kenneth Johnson on December 3, 1960. During their 60 years of marriage, they were blessed with 6 children, 8 grandchildren, and 12 great-grandchildren. Delores will be deeply missed by her husband Kenneth Johnson; her children: Cheryl (Gary) Ek, Keith (Debbie) Johnson, Kendall Johnson, Cindy Parker, Kurt Johnson, and her daughter-in-law, Cathy Johnson. She is survived by 6 grandchildren: Brandi (Ryan) Hammond, Brooke (David) Franco, Nick Johnson, Bethany Parker, Brandon Ek, Bailey Nagorski, and one step-grandson, Donald Mischo. She is also survived by 12 great-grandchildren: Brian, Alexis, McKenna, Keelyn, Brielle, Asher, Evelyn, Cole, Brenton, Tobias, Corban and Urijah. Also surviving are her brother, Harold (Barbara) Zawacki, and sister, Dorothy Schultz, dear friends- Bill Parker and Kelly Nagorski, brothers and sisters-in-law, many nieces and nephews and other family, special neighbors, and friends. She was preceded in death by her son, Kevin Johnson, her granddaughter, Amanda, and grandson, Nathan. Her brother-Henry Zawacki, her sisters-Katherine Voss, Genevieve Durrant, and Cecilia Ehrenberg also preceded her in death. One of Delores’ favorite places was the gazebo in her backyard, overlooking the Tomorrow River. She enjoyed the birds, especially the hummingbirds. She was also an avid collector of Pillsbury Doughboys. Most of all, spending time with her family brought her much joy. Prior to her illness, she helped out at church in a variety of roles. Her family would like to offer special thanks to Pastor Gretchen Anderson of Peace Lutheran Church, the nurses and staff of Ascension Hospice and other family and friends who made special visits during her final days and prayed for her. Each one of you touched her life and our family, and made this journey a little brighter. A private family service was held with burial to take place at a later date at Oak Grove Cemetery. The Jungers-Holly Funeral Home of Amherst is assisting the family with arrangements.

Delores M. Johnson, 79, passed away peacefully at home after a courageous battle with cancer. She was born on April 17, 1941, to John and Gertrude Zawacki. She married Kenneth Johnson on December 3, 1960. During their 60 years of marriage,... View Obituary & Service Information

The family of Delores M. Johnson created this Life Tributes page to make it easy to share your memories.

Delores M. Johnson, 79, passed away peacefully at home after...

Send flowers to the Johnson family.