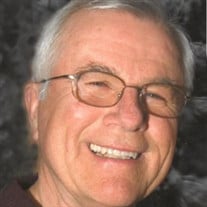 DeLyle Otto Spindt Henschel age 82 of Waupaca, WI went to his heavenly home on Wednesday, June 17, 2020 at North Haven Assisted Living in Stevens Point. He was born on March 4, 1938 in Kiel, WI, son of the late Edwin and Eva (Brickbauer) Henschel. DeLyle married his first wife, Grace Rintelmann on July 1, 1961, and they were married 43 years until her passing on July 20, 2004. He then married Rev. Ann Spindt on May 18, 2007 in Waupaca, WI. She survives. DeLyle was grateful for his loving marriage to Grace and felt blessed to find love a second time with Ann. DeLyle was a 1960 graduate of Lakeland College and received his Master’s degree from VanderCook College of Music. He was a band teacher for Mishicot, Verona and New Berlin schools in WI and supplemented his teaching salary by house painting in the summers. DeLyle was a member of the First United Methodist Church in Waupaca, the Wisconsin Bandmasters Association and the DJ’s vocal quartet from Lakeland College, singing together until just a few years ago. He played in community bands and sang in church choirs every place he lived. He enjoyed playing the trombone, golfing, reading, bowling, camping, traveling, family ski trips, playing Bridge, 500, Sheepshead and other card games. DeLyle also enjoyed coaching youth sports, including little league and soccer. In 1993, DeLyle gave the gift of life by donating bone marrow to Rachel (Miller) Adams, who became part of the extended Henschel family. In addition to his wife, Ann Spindt Henschel, he is survived by a daughter, Beth (Mike) Grzesiak of Menomonee Falls, WI and their children, Madison and Marisa; sons, Peter (Dianne) Henschel of Minnetonka, MN and their children, Zac (Kate), Ben, Ellie (Nick) Domich and Mali; Michael (Toni) Henschel of White Oak, PA and their children, Daniel and Jonathan; Dan (Erika) Henschel of Telluride, CO and their children, Eva and Leif; Great Grandchildren, Rory and Luke Henschel, Warren and Aili Domich; brother, Floyd (Gail) Henschel of Beaver Dam, WI; brothers and sisters-in-law, John (Patti) Spindt of Gilbert, AZ, Eric (Jacky) Spindt of Waupaca and Joyce (George) Schowalter of West Bend, WI; plus many nieces and nephews. He was preceded by his first wife, Grace and brother and sister-in-law, DuWayne (Lavonne) Henschel. Memorial services will be on Saturday, July 31, 2021 at 2:30 pm at First United Methodist Church in Waupaca, WI with Reverend Amy Powell and Reverend Steve Polster officiating. Friends may call on Saturday from 12:30 pm until the time of services at the church. DeLyle requested that memorial gifts be directed to Lakeland University, VanderCook College of Music and First United Methodist Church of Waupaca.

The family of DeLyle Otto Spindt Henschel created this Life Tributes page to make it easy to share your memories.