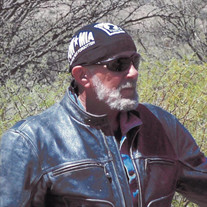 Dennis A. Thompson age 75 of Wild Rose, passed away peacefully on Saturday September 4, 2021 at Thedacare Hospital in Wild Rose. Dennis was born in the Wild Rose Hospital on November 14, 1945, the son of Laurel and Verna (Guest) Thompson. After graduating from Wild Rose High School in 1963, Dennis enlisted in the Navy in 1965. After special training in California, he was deployed to Vietnam as a Corpsman, thus becoming “Doc Thompson” to many of his life long brother Marines. Dennis was honorably discharged in 1969, but suffered from PTSD for the rest of his life. After his years in the Military Service, Dennis worked at the Wisconsin Veterans Home in King for several years before beginning his career as a Rural Letter Carrier for the Wild Rose Post Office, retiring in 2000. Beginning in 1988, he coached junior high basketball for several years, and womens softball in 1992. He enjoyed many years of hunting, playing baseball, camping and riding his beloved Harley. In 2006 he joined hundreds of motorcyclists in the Run For The Wall, riding from California on a 10 day journey across America to Washington DC and participating in the Rolling Thunder Motorcycle Rally. Dennis is survived by his wife Diane (nee Suehs) of 36 years; three daughters, Becky Webie of Iola, Tammy (special friend Joe Struck) Wilkinson of Wild Rose and Wendy Thompson of Onalaska; mother of his children, Charlotte Thompson of Wild Rose; a step son Michael (Lynn Teall) Thompson of Marion; a sister Dixie Burnard of Stoughton; grandchildren Haeleigh Wilkinson, Jacob Webie, Austin Webie; a step grandson Dillon Smith; brothers and sisters-in-law Jeff Suehs, Jerry and Jane Suehs, John and Teri Rae Suehs all of Manawa, many nieces, nephews, cousins and friends. He will be missed by his fur baby Ava and grand fur babies Tatum and Zues. Dennis was preceded in death by his parents, sisters Donna Schultz and Debbie Johnson, his father and mother-in-law Carl and Loyola Suehs, brother-in-law Jim Suehs, son-in-law John Wilkinson and special friends David O’Cull and Jim Finch. A Memorial Service with Military Honors will be held at Holly Funeral Home in Wild Rose on Saturday, September 11, 2021 at 2:00 PM with Dennis’ Godson, Pastor Josh Suehs officiating. Friends and family may visit at the funeral home beginning at 1:00 PM. Burial will be held at a later date. Holly Funeral Home of Wild Rose is assisting the family with arrangements. A special Thank You to the staff at Thedacare Wild Rose from Dennis’s family for the care of Dennis in his final hours and kindness shown to his family. In lieu of flowers a memorial has been established in Dennis Thompson name. Online condolences available at www.hollyfuneralhome.com

Dennis A. Thompson age 75 of Wild Rose, passed away peacefully on Saturday September 4, 2021 at Thedacare Hospital in Wild Rose. Dennis was born in the Wild Rose Hospital on November 14, 1945, the son of Laurel and Verna (Guest) Thompson. After... View Obituary & Service Information

The family of Dennis A. Thompson created this Life Tributes page to make it easy to share your memories.

Dennis A. Thompson age 75 of Wild Rose, passed away peacefully...

Send flowers to the Thompson family.