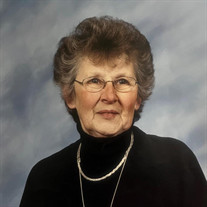 Dolores JoAnn Nygaard Knutson, age 91, of Waupaca, went to be with her Lord and Savior on Tuesday, April 26, 2022. She was born in Scandinavia on May 25, 1930 to the late Carl and Sadie Nygaard. Dolores, also known as Grandma Lolly, was the oldest of six children. She was married to Elroy (Jr) Knutson in June 1949. He preceded her in death in October 1990. She was a loving mother, grandmother, and great-grandmother. Dolores was devoted to her family. She was an excellent cook, seamstress and hard worker. Previous to retirement, Dolores worked for the Iola-Scandinavia Public Schools where she served as a cook. She also served as a waitress at the Crystal Café during the summers and later was employed by the Veterans Home in King. Dolores was a member of Trinity Lutheran Church in Waupaca and the Bethel Circle where she helped serve lunch for funerals and sewed quilt tops for the Mission Quilters. She was a giving person and always put others before herself. Dolores was preceded in death by her parents; son-in-law David Coley; two brothers David Nygaard and Duane Nygaard; and sister-in-law Judy Nygaard. She is survived by her four daughters Darlene (Gary) Otterson, Reston VA; Diane (Pat) Mulroy, Wesley Chapel FL; Debbie (Rollie) Johnson, Waupaca; and Dawn Coley, Corsicana, TX; ten grandchildren Rob Johnson, Meredith Otterson, Kelly (Lura) Mulroy, Andy Mulroy, Melanie O’Keefe, Meegan (Paul) Gross, Jac (Michelle) Johnson, Jordan (Katie) Johnson, Sadie (James) Jordan and Jonah (Samantha) Coley. She is also survived by 13 great-grandchildren, two brothers Phillip Nygaard and Robert Nygaard, sister Carolyn McKenzie, sisters-in-law Phyllis Nygaard, Valerie Nygaard and Beverly Nygaard, numerous nieces, nephews, and special family friend Lucy Braden. A Celebration of Dolores’ life will be on Friday, June 3, 2022 at 11:00 AM at Trinity Lutheran Church in Waupaca. Reverend Erin Coutts will officiate. A visitation will be held on Friday morning from 9:00 – 11:00 AM at the church. Memorials are appreciated to Trinity Lutheran Mission Quilters or to Trinity Lutheran Youth Mission Trips. Dolores’ celebration of life will be live-streamed at click here The Holly Funeral Home of Waupaca is assisting the family with arrangements. A special thank you to the 2nd floor nurses and staff at Bethany Home for their love and care during her residency.

Dolores JoAnn Nygaard Knutson, age 91, of Waupaca, went to be with her Lord and Savior on Tuesday, April 26, 2022. She was born in Scandinavia on May 25, 1930 to the late Carl and Sadie Nygaard. Dolores, also known as Grandma Lolly, was the... View Obituary & Service Information

The family of Dolores J. Knutson created this Life Tributes page to make it easy to share your memories.

Dolores JoAnn Nygaard Knutson, age 91, of Waupaca, went to be...