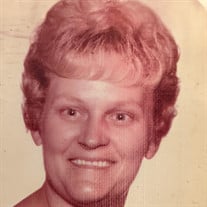 Donna left her earthly body the morning of March 10, 2022 to fly with the angels, free of the pain & failings of her body. She was born on September 28, 1933 in Waupaca, WI daughter of Edwin & Vida (Peterson) Snyder. She was the 3rd of 6 children. She & her siblings enjoyed sharing numerous stories of adventures of their simple hard-working lives on the farm, usually revealing some shenanigans by one of them. Donna moved to Milwaukee in the early 50’s with her friend and sister, she worked at Globe Union. The shenanigans continued….her father set up an account with a local grocery store for her & her sister to purchase groceries if they needed anything. At the end of one month, her father asked for a list of items they purchased & discovered a pack of cigarettes was on the list. The account was immediately closed! On June 20, 1953 she married Delbert W. Reierson at Scandinavia Lutheran Church. They lived & worked in Milwaukee but returned to visit their respective families in Waupaca & Iola on most weekends. Donna loved to cook. During the 60’s when women owned businesses were rare, she & a friend opened their own restaurant. In 1970 Donna & her 3 children moved back to the Waupaca area to be closer to her parents & siblings. Once again, her love of food drove her to several jobs-De-Lish-Us Potato Chips, Katie’s Diner, Ron & Lloyd’s Red Owl, and Piggly Wiggly. She also owned her own restaurant again for several years-The Manawa Café. Once she retired, she enjoyed playing cards, crocheting and cooking! You could find her selling her home crocheted items at the annual Strawberry Festival on Main St. each summer in Waupaca. She loved her family unconditionally with all her heart. She is survived by her children Nancy (Herman) Reierson-Resto of Milwaukee, Paul Reierson of Iola, and Scott (Sondra) Reierson of Ogdensburg. Her grandchildren Melissa Larson (Manitowoc), Jenna Jones (Waupaca), Jordan Resto (Milwaukee), Brinton Resto (Cleveland Ohio), Molly Hernandez (Flagstaff AZ), Kali Reierson (Colorado), Betsy Resto (Milwaukee) and step grandchildren-Christopher, Matt, and Nate Winters (Ogdensburg). Great grandchildren-Allie Sosin, Cody Sosin, Brooklyn Larson, Jaxon Jones, Lola Jones, Elijah Estrada, Hunter Hernandez, Brooklyn Hernandez, MJ and Kira Winters. She is survived by her siblings-Sanford Snyder, Ronald (Marion) Snyder, Shirley (Sven) Carlson and Eugene (Mary) Snyder. We would like to extend a special Thank You to her niece, Diane Stiebs and her friend, Teckla Whittaker who made it possible for her to live independently for far longer than she would have been able to manage on her own. Mom was always a champion of the underdog. We ask in her memory to pay it forward with a kindness or gesture to someone “down on their luck” or less fortunate than yourself. She took great pleasure in engaging in conversations with all that she met. So, if you had an encounter or conversation with her know that you filled her heart with joy that day. As per Donna’s wishes there will be no services.

Donna left her earthly body the morning of March 10, 2022 to fly with the angels, free of the pain & failings of her body. She was born on September 28, 1933 in Waupaca, WI daughter of Edwin & Vida (Peterson) Snyder. She was the 3rd of 6 children.... View Obituary & Service Information

The family of Donna J. Reierson created this Life Tributes page to make it easy to share your memories.

Send flowers to the Reierson family.