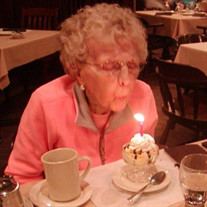 Doris E. Ostrowski, age 96, of King, WI, formerly of Stevens Point, WI, passed away peacefully on Sunday, April 25, 2021 at the Wisconsin Veterans Home in King, WI. She was born May 24, 1924 in Stevens Point, WI; daughter of Allen and Carrie (Johnson) Clark. Doris served as a teletype operator in the U.S. Army from June 21, 1944 until she was honorably discharged on October 7, 1945. On September 25, 1948, she married Alfred E. Ostrowski in Stevens Point and together they shared 66 years of marriage before his passing on November 21, 2014. Doris will be dearly missed by all of her loving family and friends. Doris was an avid reader and spent a lot of her time reading the Best Sellers of the day. Browsing the local library, she always scooped a half-dozen books on her weekly visit and gobbled them up before returning the next week to trade them in for the next round. Reading was important to her and one of many ways to educate herself about herself and the world around her. After her and her husband Al’s retirement they traveled the continent. They took their car and drove everywhere and every place, visiting friends and family, making new friends along the way. They stopped over in as many places they could, enjoying the freedom that comes with a car, a full tank of gas, and an empty highway ahead of them. As children, we would ask her where she was going and she’d always reply with, “Going crazy! Want to come along?” While Doris loved traveling to see others, she also loved others seeing her and her husband Al in their retirement home in Arizona. Doris had a standing Open House for anybody and everybody to enjoy the hot and sunny Arizona landscapes with her and Al. It was a long way from the forests and lakes of Northern Wisconsin, but as with every other new place she found herself at, she made it her home – and a nice place for others to spend time away from theirs. Doris is survived by her children, Katherine Wendt of Kenosha, WI, Donald Ostrowski of Wisconsin Rapids, WI, Mary Merfeld of Kenosha, WI, Jack (Barbara) Ostrowski of Kenosha, WI, Robert Ostrowski of Kenosha, WI, Joan Beutler of Fresno, CA, and Charles Ostrowski of Plymouth, MN; numerous grandchildren and great-grandchildren; and by her sister, Carol Kollock of Florence, AZ. She was preceded in death by her parents, Allen and Carrie Clark; her husband, Alfred Ostrowski; one son, James Ostrowski; a brother, Robert Clark; and a brother-in-law, William Kollock. A Memorial Graveside Service will be on Friday, June 4, 2021 at 2:00 PM at the Pavilion at the Central WI Veterans Memorial Cemetery in King, WI where full military honors will be performed. Sister Martha Mafurutu will officiate. The Holly Funeral Home of Waupaca is assisting the family with arrangements.

Doris E. Ostrowski, age 96, of King, WI, formerly of Stevens Point, WI, passed away peacefully on Sunday, April 25, 2021 at the Wisconsin Veterans Home in King, WI. She was born May 24, 1924 in Stevens Point, WI; daughter of Allen and Carrie... View Obituary & Service Information

The family of Doris E. Ostrowski created this Life Tributes page to make it easy to share your memories.

Send flowers to the Ostrowski family.