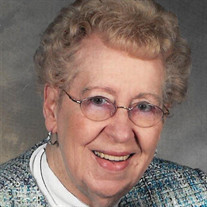 Dorothy L. Bartz, age 95, of Waupaca, WI, moved on to her next great journey alongside her husband on Wednesday, December 23, 2020. She was born October 27, 1925 in Milwaukee, WI; daughter of Leonard and Ella (Buelow) Weckwerth. Dorothy attended Bartlett Avenue School through the eighth grade and graduated from East Division High School in Milwaukee, WI. After high school, she did a year-round nurses training for three years at St. Mary’s Hospital in Milwaukee where she obtained her nursing degree. During this time, she made a commitment with the U.S. Government to be available to be called upon as part of the cadet nurse corp during WWII. After leaving the Milwaukee area, Dorothy also worked as a scrub nurse for surgeries in Sheboygan, an industrial nurse at Kimberly Clark, a nurse at Atlas Mill (a Kimberly Clark Subsidiary) in Appleton, a nurse at Appleton Medical Center, and retired from St. Elizabeth’s Hospital in Appleton. During her nursing years at Atlas Mill, Dorothy met the love of her life, Frederick C. Bartz. After only three months of courtship, Dorothy and Fred were married on June 21, 1952 at St. Paul’s Lutheran Church in Appleton, WI. Together they had five children and they shared 67 years of marriage before Fred’s passing at the beginning of this year on January 4, 2020. In the early 1990’s, Dorothy and Fred moved to Waupaca, WI. In their retirement, they volunteered for many years at the Wisconsin Veterans Home in King, the Waupaca Food Pantry, and for the Waupaca Hospital Auxiliary. Dorothy enjoyed camping, involvement with her bowling and golf leagues, and spending time with her loved ones. She was always filled with her fun, sassy, teasing way, even up until the very end. Dorothy will be dearly missed by all of her loving family and friends. Dorothy is survived by four children, David Bartz of Madison, WI, Steven (special friend, Dottie Armbruster) Bartz of Manawa, WI, Carol (Jeffrey) Bartz-Bentz of Manawa, WI, and Sara Krause of Wisconsin Rapids, WI; four grandchildren, Errin Bentz of Minneapolis, MN, Jennifer Krause of Fond du Lac, WI, Sandi Henning of Pickett, WI, and Nathan Krause of Wisconsin Rapids, WI; one sister, Arlene Giese of Milwaukee, WI; and by many other nieces, nephews, other relatives and friends. She was preceded in death by her parents, Leonard and Ella Weckwerth; her husband, Frederick Bartz; a son, Carl F. Bartz; and one brother, Carl A. Weckwerth. A Funeral Service will be on Tuesday, December 29, 2020 at 10:30 AM at the Holly Funeral Home in Waupaca, WI. Reverend Ben Kempfert will officiate. A visitation will be held on Tuesday morning from 9:30 – 10:30 AM at the Holly Funeral Home. Burial will take place following the service on Tuesday at 1:00 PM at Wisconsin Memorial Park in Brookfield, WI. The Holly Funeral Home of Waupaca is assisting the family with arrangements. The family would like to thank the caring and compassionate care of Dr. Paul Sletten and ThedaCare Hospice Services, and the devoted and loving staff at Park Vista in Waupaca. The special care our mother received will never be forgotten. As our mother would always say, “Eat dessert first, life is uncertain...”

Dorothy L. Bartz, age 95, of Waupaca, WI, moved on to her next great journey alongside her husband on Wednesday, December 23, 2020. She was born October 27, 1925 in Milwaukee, WI; daughter of Leonard and Ella (Buelow) Weckwerth. Dorothy attended... View Obituary & Service Information

The family of Dorothy L. Bartz created this Life Tributes page to make it easy to share your memories.

Send flowers to the Bartz family.