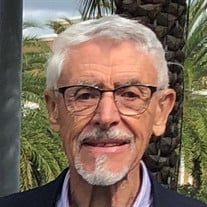 Earl Herbert Jr. of Waupaca Wisconsin, crossed his final finish line on the 28th of January, 2020. He was 91. Born in Green Bay, Wisconsin in 1928 to Earl Herbert Sr. and Edna (Jarvis) Herbert, he spent his youth in Coleman, Wisconsin. Herbert is a graduate of St. Norbert College and earned a master’s degree from the University of Colorado. In 1955, Herbert married his beloved friend and dearest companion, Janet (Wilson) Herbert. Earl and Janet are proud parents of Todd (Jody) Herbert, L’rae (Larry) Flynn, Lisa (Kevin) Webber, Sue (Paul) Amber and Luis Mansilla. In addition, he is survived by his grandchildren, Erin Mandel-Ruttenberg, Ryan Flynn, Shannon Flynn, Jordan Herbert, Alexander Webber, Nicolette Amber, Christopher Webber, Olivia Amber, Edyn Herbert, and Marisa Webber, and two great-granddaughters, Madeline Flynn and Aubrey Herbert. He is also survived by his sister-in-law Judie (Fast) Wilson, niece, Sandi (Wilson) Guite and nephew, Dan Wilson as well as special friends Lynn Rhode, Greta (Yates) Smith and Ase Jorstad. Herbert was preceded in death by his grandson, Bryce Herbert, brother-in-law, Dr. Roger Wilson and Nephew, Greg Wilson. Over 37 years, Herbert taught at various high schools including Coleman, Sauk-Prairie, and Manitowoc Lincoln. He was a highly successful coach leading his teams to 22 conference championships and 4 state championships. Herbert was honored for his gifted coaching by being inducted into the St. Norbert College’s Hall of Fame and the Wisconsin Track Coaches Association Hall of Fame, among others. Herbert proudly served in the US Army from 1951-53, seeing combat while deployed to Korea. He was a member of the VFW and in 2017 took part in the Honor Flight. Herbert strongly believed in giving back to his community and supporting others in need. During his life he served as a Boy Scout leader, organized Optimists youth track events, volunteered at the Wisconsin Veteran’s Home in King, Waupaca Food Bank as well as at Waupaca Meals on Wheels. He also served as a trustee for the Parfreyville United Methodist Church. A private service will be held by his family to celebrate his life and the many gifts he shared. Herbert strongly believed in giving back to his community. Janet Herbert and his children request that in lieu of flowers, please live as Jesus Christ did; send donations or give time to anyone you know in need. Holly Funeral Home of Waupaca assisted family with arrangements.

Earl Herbert Jr. of Waupaca Wisconsin, crossed his final finish line on the 28th of January, 2020. He was 91. Born in Green Bay, Wisconsin in 1928 to Earl Herbert Sr. and Edna (Jarvis) Herbert, he spent his youth in Coleman, Wisconsin. Herbert... View Obituary & Service Information

The family of Earl H. Herbert Jr. created this Life Tributes page to make it easy to share your memories.

Send flowers to the Herbert family.