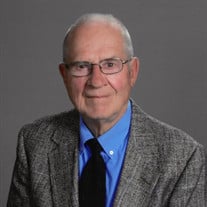 On November 30, 2020 Edward N. Hebblewhite, age 88, departed this world for the next big adventure. Though he resided at Brookdale Senior Living Community the day he passed, the home of his heart was the farm in Amherst that had been in the family since the 1800s. He was born on a neighboring farm in Lanark to Nathan and Lois (Dwinell) Hebblewhite. A graduate of Amherst High School with a desire to see the world he joined the U.S. Air Force in 1952, serving in Japan, South Korea and Bellingham, WA and was honorably discharged in 1956. After the Air Force he worked at Allis-Chalmers in Milwaukee where he met his wife of 60 years, Genevieve R. Woyak. Ever the charming country boy his opening line was said to be "Hi, I'm from Amherst, I hear you're from Stevens Point." They were married in Milwaukee February 6, 1960. Edward will be deeply missed by his loving wife, Genevieve Hebblewhite of Stevens Point, WI; three children, Deborah Hebblewhite of Denver, CO, Arthur (Rebecca) Hebblewhite of Waunakee, WI, and Fred (Lori) Hebblewhite of Amherst, WI; his daughter-in-law, Theresa Collins of Madison, WI; grandchildren, Grant, Sawyer, Rachael, Olivia, Aaron, Zuri and Elliott Hebblewhite as well as many nieces, nephews, relatives, neighbors and friends. He was preceded in death by his parents, Nathan and Lois Hebblewhite; his son, John Hebblewhite; one sister, Alta (Selmer) Inderdahl; and three brothers, Fred Hebblewhite, Jerome (Elayne) Hebblewhite, and Robert “Bud” Hebblewhite. A talented man who grew up farming Ed worked in many arenas; building maintenance, plumbing, truck driving and school bus driving to name a few. His affinity for farm work never left him but his lifelong vocation was flying. He got his first airplane ride at the county fair for just one dollar. He was hooked. At the age of 18 he saved up enough money to take flying lessons and obtained his Private Pilot's License, a significant feat for a young man of that day. He flew professionally for Midstate Airlines and Michigan Wisconsin Pipeline and even owned a gyrocopter for a bit, just for fun. As a Pilot Edward went on to acquire Commercial, Instrument, Multi-Engine, Air Transport and Rotor Wing ratings. Ed was always on the move. Until just months before he passed he filled his days working around the farm on any of a myriad of projects from cutting wood, cutting down trees, repairing farm buildings, maintaining farm machinery or just tinkering doing "typical Grandpa Ed things." He was interested in forestry and conservation and planted acres of trees on the farm property through the years. A favorite pass time for he and Gen was to drive out to the fields at sunset to admire the beauty of the white tailed deer as they entered the clearings to browse. Ed and Gen traveled together enjoying trips both domestic and international. Especially memorable for Ed were their trip to Seoul, South Korea to commemorate with other Vets the 50th Anniversary of the Korean Armistice and a trip to Europe to visit landmark sites of World War II. He was a long time parishioner of St. James Catholic Church in Amherst, a proud member of the American Legion, the Waupaca Veterans of Foreign Wars Post 1037, the Aircraft Owners and Pilots Association and the Experimental Aircraft Association. A kind and gregarious man, he was known by friends and family alike as a delightful storyteller with a prodigious memory chock full of specific dates, facts, events and perhaps just a few embellishments. All enjoyed his sense of humor, his gentle teasing and his willingness to make the joke about himself. Ed lived his life on "Lombardi Time." For the unaware, the late great Coach Vince Lombardi's rule for his players was either you show up 15 minutes early, or you were considered late. No doubt Saint Peter is getting a refresher on the concept if those pearly gates aren't opening fast enough. Those that loved and knew him well are heartbroken he has left too soon but can hear Ed saying as he goes "If you're waiting for me, you're backing up." In lieu of flowers the family asks donations in Ed's honor be sent to the Salvation Army, an organization he proudly volunteered with for many years ringing the bell at Christmas time. A Private Family Funeral Service is being held at the Jungers-Holly Funeral Home in Amherst, WI. Edward will be interred in the Spring/Summer of 2021 at the King Veteran's Cemetery where he will receive full military honors. At that time the family will be inviting all friends and relatives to a Celebration of Ed’s Life. The Jungers-Holly Funeral Home of Amherst is assisting the family with arrangements.

On November 30, 2020 Edward N. Hebblewhite, age 88, departed this world for the next big adventure. Though he resided at Brookdale Senior Living Community the day he passed, the home of his heart was the farm in Amherst that had been in the... View Obituary & Service Information

The family of Edward N. Hebblewhite created this Life Tributes page to make it easy to share your memories.

Send flowers to the Hebblewhite family.