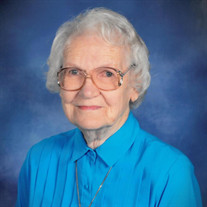 Eilene Elizabeth Paulson, 99, of Ogdensburg, passed away September 6, 2020 at Bethany Home in Waupaca. She was born March 17, 1921 in the Town of St Lawrence, Waupaca Co., the daughter of Otto and Pauline (Hass) Steinbach. She attended Maple Ridge School, St. Paul’s Evangelical Lutheran School, and Little Wolf HS in Manawa, graduating in 1939. Eilene began her life-long tradition of stewardship at the age of 12 years, with a savings deposit of $1.68, in the Farmer’s State Bank of Manawa. She married Leonard E. Paulson on November 3, 1940 and moved to the Paulson family farm where she worked and resided until her admission to Bethany at the age of 98. In addition to farming, she and Leonard developed Casey Lake Campground and managed it for 30 years. Eilene was a 4-H leader for 15 years and a member of her Extension Homemaker’s club for 54 years, both of which afforded her lifelong friendships. She was a member of the First Baptist Church of Waupaca from April 1950 until the time of her death, and a devoted participant in the Esther Group. She taught Sunday School for 35 years and retained many precious memories of the children in her classes. Eilene is survived by two sons- Steven (Judy) Paulson and Warren Paulson of Ogdensburg; two daughters- Judy (Richard) Florence of Cornucopia, WI and Jean Paulson of Cokato, MN; six grandchildren- Jeffrey Paulson, Diane Nelson, Sarah Rosecrans, Matthew Florence, David Florence, and Jacob Paulson; eleven great grandchildren; eight great-great grandchildren, and many nieces and nephews. She was preceded in death by her husband, her parents, three brothers- Erwin, Alfred, and William, and two grandchildren- Lynne Paulson and Jennifer Peterson. Burial will be held at Lakeside Memorial Cemetery, Waupaca, following a private family graveside service. Holly Funeral Home of Waupaca is assisting the family with arrangements.

Eilene Elizabeth Paulson, 99, of Ogdensburg, passed away September 6, 2020 at Bethany Home in Waupaca. She was born March 17, 1921 in the Town of St Lawrence, Waupaca Co., the daughter of Otto and Pauline (Hass) Steinbach. She attended Maple... View Obituary & Service Information

The family of Eilene E. Paulson created this Life Tributes page to make it easy to share your memories.

Send flowers to the Paulson family.