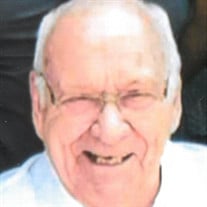 Eugene (Gene) Bosetti, age 89, died peacefully on Thursday, December 3, 2020 at his daughter’s home in Tigerton with family around him. He was born on March 2, 1931 to Albert and Anna Bosetti. The oldest of five children, they were raised in Milwaukee, Wisconsin where he attended Boy’s Tech High School. At nineteen, he enlisted in the United States Army and served during the Korean Conflict. Gene earned the Combat Infantry Badge and was awarded a Purple Heart for injuries he sustained in combat. The injuries resulted in the amputation of his right leg above the knee. This injury would later affect the choice of his career. Gene returned to Milwaukee where he married Marlyn Ponik in 1953 and raised a family together until her death in 1979. Along the way, Gene decided to learn how to make artificial limbs because he was exposed to the need of having his own prosthesis adjusted and repaired. He is a 1960 graduate of Northwestern University Prosthetics Program that led to a career as a Prosthetist for over 40 years, 18 of those years were as owner of his family business in Neenah, Wisconsin. After the death of his wife, Marlyn, Gene met and married Suzanne Shoberg in 1982. They enjoyed many years together during his retirement that included full time RV-ing, gambling at casinos across the U.S., and visits to many National Parks, until her death in 2017. Gene is survived by his children, Ross (Brenda) Bosetti of Waupaca, Rick (Roberta) Bosetti of Greenville, and Kim (Bruce) Rolfs of Tigerton. Also survived by 7 grandchildren, 4 great-grandchildren, and a new great-grandbaby on the way. Gene is additionally survived by his siblings, Norm (Rose) Bosetti, Pat (Fred) Stern and a sister-in-law, Mary Bosetti, also many cousins, nieces, and nephews. He was preceded in death by his parents and wives, a sister and brother-in-law, Margaret (Leon) Wierschem, and a brother, Richard Bosetti. Those that knew Gene will remember he never let his “disability” stop him from doing anything that he wanted to do. They will remember his love of singing and telling jokes, and his lovable charm. Condolences, memorials, and notes of remembrance should be sent to Kim Rolfs at P.O. Box 69, Tigerton, WI 54486. Per the family’s wishes, no services are being held at this time. The Holly Funeral Home of Waupaca is assisting the family with arrangements.

Eugene (Gene) Bosetti, age 89, died peacefully on Thursday, December 3, 2020 at his daughter&#8217;s home in Tigerton with family around him. He was born on March 2, 1931 to Albert and Anna Bosetti. The oldest of five children, they were raised... View Obituary & Service Information

The family of Eugene (Gene) J. Bosetti created this Life Tributes page to make it easy to share your memories.

Send flowers to the Bosetti family.