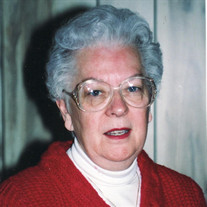 Eunice E. (Nulton) Lawrence, age 86, of Waupaca, WI, went to her Heavenly home on Sunday, September 22, 2019 at the Wisconsin Veterans Home in King, WI. She was born July 1, 1933 in Rice Lake, WI; daughter of C. Paul and Ethel (Bemis) Nulton. Eunice and her family lived in several small western Wisconsin villages; Colby, Elmwood, Pepin and LaFarge. She graduated from LaFarge High School in 1951 and graduated from Stout Institute in 1955. Eunice taught high school home economics in Melrose and Viroqua, Wisconsin. She was united in marriage to U.S. Air Force Technical Sergeant Donald J. Lawrence on July 27, 1956. When Donald retired from active military duty, they moved to Waupaca, WI in 1971. Together they shared 55 years of marriage before his passing on April 12, 2012. Eunice served the community as the Farmington Township certified clerk / treasurer for 14 years and a Waupaca County Board Supervisor for 24 years. She volunteered at the Waupaca County Courthouse, her church, and the Wisconsin Veterans Home where she faithfully played piano for the Protestant chapel services for 19 years. Eunice will be dearly missed by all of her loving family and friends. Eunice is survived by her son, Stephen (Lisa) Lawrence of Waupaca, WI; her daughter, Mardana Lawrence of Waupaca, WI; three grandchildren, Christopher (Jackie) Lawrence of Hortonville, WI, Jennifer Lawrence of Waupaca, WI, and Sara Lawrence of Waupaca, WI; two step-grandchildren, Graham Britton of Waupaca, WI and Ashley (Steve) Petroske of NC; and great-grandchildren, Eleanor Lawrence, Oliver Lawrence, Luca and Baen Kerney. She is also survived by numerous nieces, nephews, other relatives and friends. She was preceded in death by her parents, C. Paul and Ethel Nulton; her husband, Donald Lawrence; and three siblings, Virgil Nulton, Francis Hoftiezer, and Mary Schroeder. A Funeral Service will be on Saturday, September 28, 2019 at 11:00 AM at the Parfreyville United Methodist Church, N1979 County Road K, Waupaca, WI. Reverend Eric Taylor will officiate. A visitation will be held on Saturday morning from 10:00 – 11:00 AM at the church. Burial will be at Rural Cemetery in the Town of Dayton following the service on Saturday. In lieu of flowers, memorials may be given to the Rural Cemetery Association in the name of Eunice E. Lawrence. The Holly Funeral Home of Waupaca is assisting the family with arrangements.

The family of Eunice E. Lawrence created this Life Tributes page to make it easy to share your memories.

Send flowers to the Lawrence family.