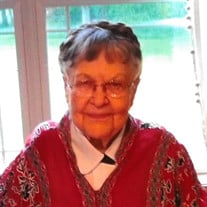 Evelyn “Evie” M. Brown, age 95 of Waupaca, made her journey to Heaven on March 21, 2022. She was born in Chicago, IL on May 27, 1926 to Erik and Sadie Lindskoog. On April 5, 1946 she married Jesse “Jess” Brown. Along with Ruth Strassburg, Evie started the first Pre-school in Waupaca. They worked as co-teachers until Evie opened and operated Brownie County Nurtury, a home day-care. In November, 1969, Evie was a charter member of the Church of Christ in Waupaca. Evie is survived by three sons: Keith (Becky) Brown of Arkansas; Shawn (Robyn) Brown of Missouri; and Dru (Melonie) Brown of Maryland; and two daughters: Laurie (Bill) Mielke and Jodie (Jim) Montgomery, both of Wisconsin. She is further survived by 26 grandchildren, 40 great-grandchildren, two beloved sisters: Avian Todd of Iowa and Carol Beckland of Wisconsin. In addition, she leaves behind numerous relatives and friends. She was preceded in death by her parents, Erik and Sadie Lindskoog; her husband of 61 years, Jesse Brown; her daughter, Christine Henricksen; a granddaughter, April Joy Henricksen; her brother, Alver “Al” Lindskoog and a sister, Violet “Vi” Richards. Funeral Services for Evelyn Brown will be held at 2:00 PM on Friday, March 25, 2022 at Holly Funeral Home in Waupaca, with Bill Mielke, evangelist, officiating. Visitation will be held from 1:00 PM until time of service at Holly’s.

The family of Evelyn "Evie" M. Brown created this Life Tributes page to make it easy to share your memories.

Send flowers to the Brown family.