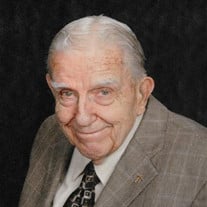 Frederick C. Bartz, age 97, of Waupaca, WI, formerly of Appleton, passed away on Saturday, January 4, 2020 at Park Vista in Waupaca, WI. He was born December 13, 1922 in the Town of Cicero, Outagamie Co., WI; son of Edward and Amanda (Schroeder) Bartz. He was baptized on December 16, 1922 at St. John’s Church in the Town of Center, Outagamie Co., WI. Fred’s mother passed away in May 13, 1925 and he was raised by his aunt, Hulda Schroeder. On March 21, 1937, he was confirmed at St. Paul’s Church in Appleton. Fred went to public schools in Brillion and Hilbert and attended Columbus Grade School and Roosevelt Junior High School. He was a member of the first sophomore class to enter the new Appleton High School (now Appleton West High School) and graduated in 1941. After high school, Fred attended UW-Madison for about 10 weeks and on December 4, 1942, he enlisted in the U.S. Army Air Corp. He was in the 8th Air Force – 306th Bond Group in England and after the war was over, he was transferred to the 9th Air Force – 664 Air Material Squadron to Germany. Fred was honorably discharged on March 4, 1946 as a sergeant. On June 21, 1952, Fred married Dorothy L. Weckwerth in Appleton, WI and together they had five children, Carl, David, Steven, Carol, and Sara. Their first born, Carl F. Bartz, died in infancy on May 1, 1953. Fred worked six-hour shifts at Lake View Mill for Kimberly-Clark Corp. for about three years before receiving the opportunity to go on salary at research and development for Kimberly-Clark Corp. He was a technician in the U.S. Service Products and Non-Woven Business Division for about 29 years. He was also a Quarter Century member for Kimberly-Clark Corp. Fred retired from Kimberly-Clark Corp. in 1982. After retirement, Fred and Dorothy moved to Waupaca to be closer to family. They both enjoyed volunteering at the Waupaca Food Bank and the Wisconsin Veterans Home in King. Fred was a member of the Disabled American Veterans and the 8th Air Force Historical Society. Fred is survived by his loving wife, Dorothy Bartz of Waupaca, WI; four children, David Bartz of Madison, WI, Steven (special friend, Dottie Armbruster) Bartz of Greenville, WI, Carol (Jeffrey) Bartz – Bentz of Manawa, WI, and Sara Krause of Wisconsin Rapids, WI; four grandchildren, Errin Bentz of Minneapolis, MN, Jennifer Krause of Fond du Lac, WI, Sandi Henning of Pickett, WI, and Nathan Krause of Wisconsin Rapids, WI; and also by several great-grandchildren, other relatives and friends. He was preceded in death by his father, Edward Bartz; his mother, Amanda Bartz; his aunt who raised him, Hulda Schroeder; an infant son, Carl F. Bartz; and an infant sister, Lydia Bartz. A Funeral Service will be on Thursday, January 9, 2020 at 11:00 AM at the Holly Funeral Home in Waupaca, WI with full military honors to follow. Reverend Ron Siemers will officiate. A visitation will be held on Thursday morning from 10:00 – 11:00 AM at the Holly Funeral Home. Burial will be at Wisconsin Memorial Park in Brookfield on Friday afternoon at 1:00 PM. The Holly Funeral Home of Waupaca is assisting the family with arrangements. The family would like to thank the staff at Park Vista, ThedaCare Hospice, and the Holly Funeral Home for their kind and compassionate care.

Frederick C. Bartz, age 97, of Waupaca, WI, formerly of Appleton, passed away on Saturday, January 4, 2020 at Park Vista in Waupaca, WI. He was born December 13, 1922 in the Town of Cicero, Outagamie Co., WI; son of Edward and Amanda (Schroeder)... View Obituary & Service Information

The family of Frederick C. Bartz created this Life Tributes page to make it easy to share your memories.

Send flowers to the Bartz family.