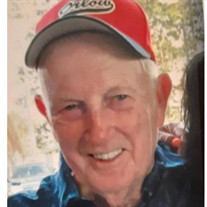 Frederick (Freddie) Jastromski age 84, passed away at St Michaels Hospital in Stevens Point on Thursday, October 8, 2020 due to Covid-19. Fred was born on January 11, 1936 in the Town of Stockton to Alvin and Susan (Trzebetowski). Fred attended Amherst Schools until his sophomore year, he then entered the U.S. Army and was in the Army from 1954 thru 1956. After serving his Country, Fred moved to Milwaukee and worked for P&H Mining Equipment. Fred married Mary Jane (Pionkowski) on January 31,1959. In 1961 Fred partnered with Al Gilge and took over Club Orlow tavern on Mitchell Street in Milwaukee. During that time, Fred ran the bar and coached many successful baseball and softball teams. Club Orlow was a favorite watering hole to many old friends who moved from Central Wisconsin to work in Milwaukee. In 1968 Fred and Mary Jane moved back home to Amherst and purchased Chubby’s Bar (Suski's) and renamed it Club Orlow. For 54 years, Fred sponsored many baseball, basketball, pool, dart, foosball, volleyball, bowling, and horseshoe teams with thousands of players being able to say they played for Freddie's Club Orlow. Fred has been a longtime fixture at Amherst Falcon sporting events, he is an original member of the Amherst Booster Club, and is known for his tireless work on the Nelson Park Ball field. Fred among others, created the Amherst Youth Baseball program in 1974 and has continued to support youth athletics in Amherst. Fred loved going to Baseball games, Plover and Stevens Point Legion, Scandy, Lanark, & Plover BABA games and even more so, going to his grandchildrens games. Fred was a longtime member of the Portage County Tavern League, the VFW. Fred is survived by his wife; Mary Jane of Amherst, his children; Debra of Muskego, Dale (Deborah) of Nelsonville, Darryl (Karla) of Amherst. Three grandchildren that he thought the world of, Kelly (Gregg) Trudell, Kyle, and Kevin (Czarina). Brothers; Leroy, Walter of Milwaukee, John (Bonnie), Gary (Karen), & Robert (Connie) of Amherst, Sisters; Natalie Rozga, & Sharon Sopa of New Berlin, and Brother-in-Law; Ron Mrochinski of New Berlin Fred is preceded in death by his parents, brother Ronald, Sister Anita, and brother-in-laws; Art Rozga and Donald Sopa, sister-in-law; Gloria and daughter; Diane. A celebration of life will be held outdoors, weather permitting, from 2:00 PM until 6:00 PM on Thursday, October 15 at Jungers-Holly Funeral Home in Amherst and the Downtown Baseball Field. Wear your Club Orlow, Amherst Falcons, or any favorite sports team apparel. Private graveside service will be held at a later date. In lieu of flowers, a memorial scholarship will be set up in Freds name. Online condolences available at www.hollyfuneralhome.com With Fred passing away due to covid19, the family would like everyone to please follow social distancing guidelines and wear a mask. Fred's family would like to extend their deep appreciation to the wonderful medical staff at St. Michael’s hospital for their great care during his hospital stay.

Frederick (Freddie) Jastromski age 84, passed away at St Michaels Hospital in Stevens Point on Thursday, October 8, 2020 due to Covid-19. Fred was born on January 11, 1936 in the Town of Stockton to Alvin and Susan (Trzebetowski). Fred attended... View Obituary & Service Information

The family of Frederick "Freddie" Jastromski created this Life Tributes page to make it easy to share your memories.

Send flowers to the Jastromski family.