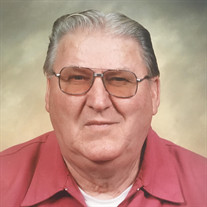 Frederick Jerome Jagielo was born on January 25, 1931 and passed away in his sleep at his home on March 25, 2022. He was the youngest of nine children born to parents, Stanislaw and Karolina (Cmeil) Jagielo in Cicero, Illinois. Fred was a Korean War veteran and had spent service time stationed in Germany. He was a member of the American Legion in Almond for 65 years. Fred and his brother Ray owned and operated Two Lakes Restaurant of Almond, WI for the majority of their working lives. Despite "retirement," Fred remained an active contributor to the daily operations and offered his ideas to improve customer service. "Freddy" enjoyed getting to know people by sharing conversation, telling jokes, discussing the latest sport scores or stock market highs and lows. He was intrigued by the internet and would request others to "Ask the Googles" for information or to play songs by his favorite singers. Freddy's positive spirit, generous heart, and timeless conversations will be missed. Fred was preceded in death by his parents, brothers: Walter, Florian, Thaddeus, Raymond, Alexander, August and sister: Emily Misch, nieces: Carolyn Misch and Linda Jagielo. Fred was never married but he never gave up the search for the "perfect wife." He is survived by his brother Edward, age 101, nephews and nieces: Mike (Julie) Jagielo, Jeff (Maggie) Jagielo, Jennifer (Wayne) Cummings, Julianne (Wes) Cox, Tom (Ellynn) Jagielo, Josephine Jagielo, Matt (Sue) Misch, and their children and grandchildren. Surviving great nephews and nieces: Anthony Jagielo, Allie Nowak, Philip Jagielo, Bella Bailey, Faydra Jagielo, Stephen Jagielo, Aaron Jagielo, Brittany Pierotti, Bryce Cummings, Brielle Cummings, Brayden Cummings, Aimee Misch, Michael Misch and Alex Jagielo. There are also ten great-great nieces and nephews. Private family services will be held at a later date. In lieu of flowers, memorials can be made to Almond American Legion Post #339.

Frederick Jerome Jagielo was born on January 25, 1931 and passed away in his sleep at his home on March 25, 2022. He was the youngest of nine children born to parents, Stanislaw and Karolina (Cmeil) Jagielo in Cicero, Illinois. Fred was a... View Obituary & Service Information

The family of Frederick J. Jagielo created this Life Tributes page to make it easy to share your memories.

Frederick Jerome Jagielo was born on January 25, 1931 and passed...

Send flowers to the Jagielo family.