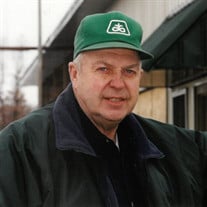 Gale F. Gordon, age 83, of Nelsonville, WI, moved on to his next great journey on Tuesday, February 23, 2021. He was born April 8, 1937 in Stevens Point, WI; son of LeRoy and Frances (Barnsdale) Gordon. Gale graduated from Amherst High School in 1955 and continued his education by attending UW-Madison, graduating with a bachelor’s degree in Dairy Science. On June 13, 1959, Gale married Ruth Ristow in Amherst and together through the years they raised three children. His passions in life were spending time with his family, tending to the family farm, and showing off his prized corn cob that he made with his grandchildren, using over 1000 milk jugs! Gale pulled his homemade corn cob in parades all over Portage County and it was just one more thing that showed his heart felt love of his family and agriculture. Dad’s directional compass was always pointed down his life’s path of pure honesty, service to community, family, conservation, moral values, religion, and agriculture. Great people make extraordinary things look easy and effortless. As his youngest son I speak for our whole family in saying it was a gift from God to watch and learn how rewarding life can be when unbridled giving, serving, and providing are the forces that are pointing your compass straight to Heaven. It brings us joy to know with Dad’s love of agriculture that on February 23rd Heaven’s bins ran over as God welcomed an amazing Harvest. Gale was active in his community serving on many committees through the years. He was a member of the Wisconsin Guernsey Breeders Association, Midwest Breeders, the Nelsonville Village Board, the Nelsonville Lutheran Church Board, and was president for 37 years of the Tomorrow River School Board, earning the title “Champion of Kids”. Gale will be dearly missed by all of his loving family and many, many friends. Gale is survived by his wife of 61 years, Ruth Gordon of Nelsonville, WI; three children, Jay (Deb) Gordon of Nelsonville, WI, Kris Toelle of Amherst Jct., WI, and Kyle (Kim Peplinski-Krupka) Gordon of Nelsonville, WI; seven grandchildren, Taylor Gordon, Rachel Gordon, Adam (Megan) Lee, Marcus Toelle, Austin (Amber) Gordon, Chase Gordon, and Afton Gordon; two great-grandchildren, Oliver Lee and Asher Gordon; one brother, Lynn Gordon of Mosinee, WI; and also by nieces, nephews, other relatives and friends. He was preceded in death by his parents, LeRoy and Frances Gordon; a granddaughter, Kayla Joy Toelle; a son-in-law, Michael Toelle; and a sister-in-law, Bette Gordon. A Graveside Service will be on Sunday, February 28, 2021 at 1:45 PM at the Nelsonville Lutheran Cemetery in the Town of New Hope, Portage County, Wisconsin. Reverend Dwight Anderson will officiate. In lieu of flowers, a memorial is being established in Gale’s name. The Jungers-Holly Funeral Home of Amherst is assisting the family with arrangements.

The family of Gale F. Gordon created this Life Tributes page to make it easy to share your memories.

Send flowers to the Gordon family.