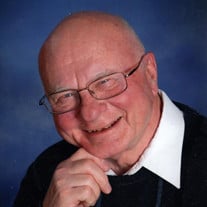 George Joseph Jirasek, of Saxeville, Wisconsin passed away at home on August 31, 2021. He was born in Berwyn, Illinois on February 12, 1940 to George John Jirasek and Mae Ann (Canik) Jirasek. He was raised in Cicero, Illinois and graduated J. Sterling Morton High School in 1958. He attended Northern Illinois University at De Kalb, Illinois graduating in 1962 with a degree in Earth Science. In 1984, he completed his Masters in Education at Governors State University in University Park, Illinois. George taught for 38 years, the majority at Libertyville High School in their science department. He created the Earth Science program fulfilling a promise he made to his university professor. He touched the lives of countless students and instilled in them the knowledge and wonder of the natural world. George was an active member of the school community and involved with many extracurricular activities including the drama program and keeping score at the Girls’ Basketball home games. He also enjoyed chaperoning his daughter’s high school band and choir trips to Florida, Hawaii, Italy, and Europe. George was active in his church communities, St John Lutheran, Libertyville, IL and Trinity Lutheran, Red Granite, Wisconsin. He served as an elder, youth group leader, and on the church councils. He served where he was needed. George shared his faith readily and gently with everyone around him. He marveled at God’s handiwork through his study of the earth and geology. On June 18th 1977, George married the love of his life, Katherine Marie (Schneider) Jirasek. Marrying later in life, he felt incredibly blessed by his family and was a dedicated husband and father. George and Kathy were blessed by two daughters, Rachel Marie in 1980 and Sarah Elizabeth in 1982, and he gained two “sons” in 2003 and 2010 when his daughters married Eric and Matt. His “dad” jokes, puns, parody songs, and wiggly eyebrows will be fondly remembered. Along with his super wide grin of a proud, adoring and loving husband, father and Godly family man. George was an avid reader and instilled the importance of life long learning in his daughters. George is survived by his wife of 44 years, Katherine Marie (Schneider) Jirasek, daughters Rachel (Eric) Bailey and Sarah (Matthew) Campbell, grandsons Nicholas Ransom Bailey, Declan Simmons Bailey, and Samuel George Bailey, his sister Judith (Richard) Janiak, many loved nieces and nephews, as well as his dear lifelong friend, Ed (Carolyn) Kveton. He was preceded in death by his parents George and Mae Jirasek, his father-in-law James Schneider, brother and sister-in-law Don and Dorothy Jirasek, nephew Scott Jirasek, and nephew/Godson Christopher Patterson. A visitation will be held on Friday, September 10, 2021 from 4:00 – 8:00 PM at the Holly Funeral Home, 526 S. Main Street, Waupaca, WI. A visitation will also be held on Saturday, September 11, 2021 from 10:00 – 11:00 AM at Trinity Evangelical Lutheran Church, 330 Foster Road, Redgranite, WI with George’s funeral service to follow at 11:00 AM. Pastor Greg Sluke will officiate. Immediately following the service there will be a luncheon at the church. George’s burial will be at 1:30 PM at Hilltop Cemetery in the Town of Saxeville, WI. The Holly Funeral Home of Waupaca is assisting the family with arrangements.

George Joseph Jirasek, of Saxeville, Wisconsin passed away at home on August 31, 2021. He was born in Berwyn, Illinois on February 12, 1940 to George John Jirasek and Mae Ann (Canik) Jirasek. He was raised in Cicero, Illinois and graduated... View Obituary & Service Information

The family of George J. Jirasek created this Life Tributes page to make it easy to share your memories.

George Joseph Jirasek, of Saxeville, Wisconsin passed away at...

Send flowers to the Jirasek family.