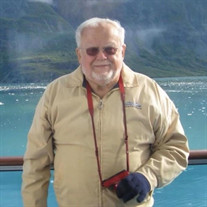 Gerald (Jerry) Allen Pitner (1941-2021) of Waupaca WI passed away peacefully with his family by his side on October 29th after suffering complications from surgery. He is survived by his beloved wife of 59 years Judith (Judy), daughter Debra, daughter Pamela, son-in-law Roland, son Mark, daughter-in-law Hiroko, five grandchildren, and four great-grandchildren. Jerry graduated from DeVry University in 1962 with a degree in Electronics Engineering Technology. He had a long and successful career in the field of electrical engineering and the technology industry. In addition to working for DuKane Inc., and helping to found Comtec Inc., Technology Group, and Plexus Corporation, he was integral in developing a number of patented systems and is co-inventor on a patented system for sorting and orienting corn cobs that is still used today. Jerry was known by many titles Husband, Father, Opa, Grandpa, Pops, Dad, Executive Vice President, W9GAP, and Grumpy Pants. Regardless of his title, those who encountered him were struck by his generosity. He had many hobbies over the years. He particularly enjoyed woodworking, remote control airplanes, RVing, fishing, amateur radio, traveling, and Westerns. A particular favorite was Gun Smoke. Above all Jerry was a man who loved and was loved by his family. Jerry and Judy were always there for their children, grandchildren, and great-grandchildren. Jerry strove to instill in his children the importance of integrity, hard work, never taking the easy road, and careful planning. “Do the hardest part first,” Jerry always said, and of course, always show up at the airport two hours before your flight departed. Jerry was calm and quiet in his temperament, but fierce in his ability to understand a problem and engineer a solution. He had an uncanny sense of smell and hearing, something that a number of his children confess to being blessed (burdened) with. He kept his family well supplied with flashlights, pocket knives, and ladders. A private family service was held. Holly Funeral Home of Waupaca is assisting the family with arrangements.

Gerald (Jerry) Allen Pitner (1941-2021) of Waupaca WI passed away peacefully with his family by his side on October 29th after suffering complications from surgery. He is survived by his beloved wife of 59 years Judith (Judy), daughter Debra,... View Obituary & Service Information

The family of Gerald "Jerry" A. Pitner created this Life Tributes page to make it easy to share your memories.

Send flowers to the Pitner family.