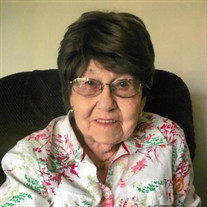 Hagara “Gary” (Radloff) Smith, age 95, of Waupaca, WI, passed away on Monday, March 15, 2021. She was born May 5, 1925 in the Town of Union, Waupaca County, WI; daughter of Charles and Edith (Geske) Radloff. Hagara was baptized June 14, 1925 in Evangelical Lutheran Church in Symco, WI by Pastor G.H. Kitzman. She was confirmed December 6, 1953 at Immanuel Evangelical Church by Reverend F.A. Reier. She graduated from Waupaca High School in 1945. On August 31, 1946, Hagara married Budd Arnold Smith in Oshkosh, WI and together they shared 72 years of marriage before his passing on April 24, 2019. They farmed the homestead until 1971. She belonged to the Immanuel Evangelical Lutheran Church and served as a greeter in church. Hagara delivered Meals on Wheels to the local community and was a member of the Granite Quarry Homemakers. She also enjoyed music, watching the Brewers baseball games, dancing, bird watching, and spending time with her grandchildren, great-grandchildren, and great-great-grandchildren. She will be dearly missed by all of her loving family and friends. Hagara is survived by her children, Diane (Don) Thiel, Phyllis (Jerry) Luttropp, Susan (John) Otterson, Betty Shanak, Ray (Pam) Smith, and Thomas Smith; son-in-law, Peter Johnson; grandchildren, Michael (Kristi) Otterson, Theresa (Curt) Cleaves, Dennis (Rhonda) Thiel, Dean (Toni) Thiel, Darren Thiel, Jeffrey (Caitlin) Luttropp, Jason Luttropp, Jodi (Carl) Hoynoski, Glen Shanak, Neil Shanak, Shawn (Karla) Smith, and Noah (Brittney) Smith; great-grandchildren, Erin (Ben) Fletcher, Jonathan and Brittany Otterson, Stephanie and Derrick Cleaves, Dalton, Devon, Renee, and Roselyn Thiel, Lydia and Luke Thiel, Mikhayla Luttropp, Adam, Hazil, Aislee and Kelsey Luttropp, and Ava Smith; great-great-grandchildren, Marybeth, Gabriel, Zoey, and Grayson Fletcher; and also by step-grandchildren, step-great-grandchildren, godchildren, nieces, and nephews. She was preceded in death by her parents, Charles and Edith Radloff; her husband, Budd Smith; a son, Roger Smith; a daughter, Joan Smith; a grandson, William Luttropp; a son-in-law, George Shanak; a half-sister, Leona Torbeck; and one brother and four sisters. A Funeral Service will be on Sunday, March 21, 2021 at 3:00 PM at Immanuel Evangelical Lutheran Church in Waupaca, WI where it will be live-streamed for those who cannot attend from the church website: www.immanuelwaupaca.com. Reverend Ben Kempfert will officiate. A visitation will be held on Sunday afternoon from 1:00 – 3:00 PM at the church where social distancing will be observed and the wearing of masks recommended. Burial will take place following the service at Lakeside Memorial Park in Waupaca. In lieu of flowers, memorials may be made to the Immanuel Evangelical Lutheran Church in Waupaca. The Holly Funeral Home of Waupaca is assisting the family with arrangements. The family would like to thank Park Vista of Waupaca for all of the loving and kind care they gave to her during her stay.

The family of Hagara "Gary" Smith created this Life Tributes page to make it easy to share your memories.

Send flowers to the Smith family.