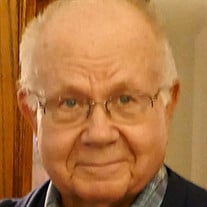 Hans V. Suomi, 81, of Mesa, Arizona formerly of Amherst, Wisconsin passed away August 29, 2021 in Tempe, Arizona. Hans was born January 11, 1940 in Aberdeen, Washington. He graduated from La Center, Washington High School and proudly served in the United States Navy for more than 20 years. He traveled to various countries in the Western Pacific which included China, Vietnam, The Philippine Islands, Japan and Hawaii. He served aboard the USS Ticonderoga. After retiring from the Navy in 1979, Hans was employed by the Amherst Phone Company for 26 years as their Purchasing manager. He was married to Priscilla (Jane) McKlem in Ithaca, Nebraska June 6, 1962. He was a member of the Amherst United Methodist Church and served as the church treasurer. He also was a member of the Amherst Fire District and held the positions of Secretary, Treasurer and was Fire Chief for 5 years. It was during his tenure as Chief that the Consolidated Amherst Fire District was formed. He also served as the District's Chief Fire Inspector and coordinated the Department's Fire Safety Education Program. He was co-chairman of the American Cancer Society Amherst Relay for Life Event and Captain of the Amherst United Methodist Church's relay team. Hans was a member of the American Legion Post 22, The VFW Post 11346 and Past President of the Fleet Reserve Association (FRA). He and his wife, Jane volunteered at the coffee shop at the Veterans Home in King. In 2006, Hans and Jane were named The Community Spirit's "Persons of the Year," In his spare time, he liked to work on restoring his 57 Chevy Pick-up truck, going to several car shows every Summer with his truck. He enjoyed taking walks with his dog Sammie and entering her in Dog Shows in the area. Hans is survived by his loving wife of 59 years, Jane of Mesa, Arizona, his sister MaryAnn (Stephen) Mosier of Brush Prairie, Washington, sister-in-law Colleen (Lyle) Muller of Chandler, Arizona and many cousins, nieces and nephews. He was preceded in death by his parents, Emil and Eleanor (Lehto) Suomi and his beloved Pembroke Welsh Corgi Sammie. Hans will be dearly missed by all his loving family, many friends and special neighbors. A memorial service will be held on Monday, October 18th at 4 P.M. at the Amherst United Methodist Church with Pastor Kari Riley officiating. In lieu of flowers a memorial will be established in Hans' name at a later date. Mariposa Gardens of Mesa, Arizona and Jungers-Holly Funeral Home of Amherst, Wisconsin assisted the family with arrangements

The family of Hans V. Suomi created this Life Tributes page to make it easy to share your memories.

Send flowers to the Suomi family.