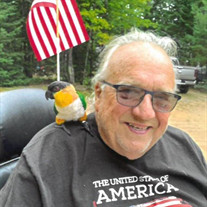 Harold Ray Harris, an Iola resident, died unexpectedly on September 16, 2021 in Eagle River, WI at one of his favorite places - at the age of 84. He was a loving husband, father, grandfather, great-grandfather, brother and uncle. Harold is survived by his wife, Helen Harris; his four children, Todd Harris, Stacey (Brian) Flannery, Kelly Harris, and Tammy (Chris) Anthony; his grandchildren, Danielle Cline, Cody Harris, Gabriel Harris, James Flannery, Patrick Flannery, Ashley Hughes, Sarha Hughes, Robert Martinez III, Adrianna Martinez, Stephanie Bengtson, Samantha Anthony, and Christopher Anthony; and many great-grandchildren, nieces and nephews. He was preceded in death by his parents; many siblings; and his grandson, Micheal Harris. Harold was born in Waupaca, WI on May 24, 1937 to Bert and Adelaide Harris. At the age of 18, in December of 1955, he joined the United States Air Force where he served our country as an Air Policeman for 4 years. Harold married Helen, a registered nurse and the love of his life. Harold loved to fish, was proud of his country, and loved his guns. Harold also loved to tinker, he was often found in the garage turning coins into beautiful and unique rings. He started the process simply by banging on the coins with a spoon until he later perfected the craft. Harold loved camping in Eagle River, WI with his wife. He often made friends as he talked to people everywhere they went, giving them fun nicknames to remember who was who in his phone. Harold’s age never slowed him down, he was always a kid at heart. He will be missed by family, friends, and all who knew him. Harold will be laid to rest on Friday, October 1, 2021 at 1:00 PM at the Central Wisconsin Veterans Memorial Cemetery in King, WI. The Holly Funeral Home of Waupaca is assisting the family with arrangements.

Harold Ray Harris, an Iola resident, died unexpectedly on September 16, 2021 in Eagle River, WI at one of his favorite places - at the age of 84. He was a loving husband, father, grandfather, great-grandfather, brother and uncle. Harold is... View Obituary & Service Information

The family of Harold R. Harris created this Life Tributes page to make it easy to share your memories.

Send flowers to the Harris family.