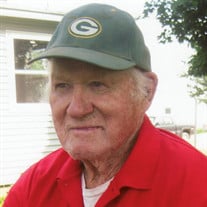 Henry William Groshek, Amherst Junction, passed away Thursday, August 1, 2019, at his farm on Skyview Road. “Hank” was born on November 19, 1925, to Leo and Helen (Jablonski) Groshek, at their farm on Porter Road in Stevens Point. He had 13 siblings. Hank married Delores Golla on April 20, 1950. They had seven children, Lloyd (Sherry), Casey (Sue), Delroy (Gretchen), Denise (Tom) Maves, Jackie (Jeff) Rutta, Gary and Wayne (Jill). Hank and Delores later divorced. Hank was preceded in death by his parents, 12 siblings and an infant son, Michael. He is survived by Delores Groshek and their children; one sister, Leona Burdge; 20 grandchildren and 19 great-grandchildren. Hank started his own dairy farm in 1948 and was proud to see it move into its third generation of operation. Over the years, Hank’s sons, daughters, and grandchildren worked to make it a successful business, in the tradition of Wisconsin’s family farm culture. Hank was a talented, self-taught concertina player. In his younger days, he traveled around Portage County playing polka gigs for various events. Later in his life, he would happily play a tune for anyone who happened to stop by his living room. He enjoyed fishing and watching Packers and Brewers games on television. Rest peacefully, Grampa Hank. Your work is done now. The Funeral Mass will be held at St. Mary of Mt. Carmel Catholic Church - Fancher at 11 AM on Wednesday, August 7th, 2019, with Father Dan Hackel, officiating. Interment will be at St. Mary of Mt. Carmel Catholic Cemetery. Visitation will be held on Wednesday, from 9 AM until the time of the service at the church. In lieu of flowers, the family has established a memorial fund in his name.

Henry William Groshek, Amherst Junction, passed away Thursday, August 1, 2019, at his farm on Skyview Road. &#8220;Hank&#8221; was born on November 19, 1925, to Leo and Helen (Jablonski) Groshek, at their farm on Porter Road in Stevens Point.... View Obituary & Service Information

The family of Henry W. Groshek created this Life Tributes page to make it easy to share your memories.

Send flowers to the Groshek family.