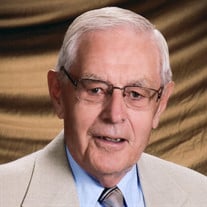 Ignatius L. "Lee" Kabat, age 88, of Waupaca, WI, passed away on Friday, January 31st, 2020 at Bethany Home in Waupaca. He was born in Green Bay, WI on March 25, 1931, a son of the late Bernard and Irene (Heimerl) Kabat. He married Joan Gerritts on May 24, 1952 in Freedom, WI. She preceded him in death on December 26, 2012. Lee began his career as a builder while in high school, he even built an addition to Freedom High School as a student. He built countless homes and cottage. In 1970 he was a general manager at Millcraft Housing, he later became President of the company. In 1971 he moved his family to Waupaca, to a home on McCrossen Lake. He also sold real estate in Waupaca and worked for his son, Dan's business, Legacy Builders of Oshkosh. Lee enjoyed time at the cottage on Kelly Lake and then home on McCrossen Lake. He always enjoyed giving his grandchildren, nieces, nephews and friends boat rides. He enjoyed playing cards, golf and spending time with friends and family. Lee was a member of the Riverside Hospital Board. He enjoyed 21 winters at the Villages in Florida and was an active member of a Catholic Church there and St. Mary Magdalene Catholic Church of Waupaca, where he served on Homehelpers. The family would like to thank the staff at Park Vista, Bethany and Theda Care Hospice for taking care of Lee the past 7 years. Survivors include his Children: Daniel (Colleen) Kabat, Leland, NC; Pat (Jeff) Fletcher, Waupaca, WI; Julie (Jeff) Layer, Plymouth, MN; Grandchildren: Brent (Rebecca) Kabat; Brian (Kindle) Kabat; Leah Fletcher; Jessica (Zach) Hauser; Holly Layer; Gretchen Layer; Great Grandchildren: Lucy Kabat; Alice Kabat; Sisters-in-law: Ruth Oudenhoven; Dorothy Gerritts; Joyce Konkle; Janice Thyes; Carol Eastman. He is further survived by numerous nieces, nephews, other relatives and friends. He was preceded in death by his parents, wife - Joan, 4 infant children, two brothers - Adrian (Helen) Kabat and Father Daniel Kabat - O.F. M. Capuchin. Brother and sisters-in-law: Robert Oudenhoven, Vernon & Anita Gerritts, Russell, Gerald & Ron Gerritts, Urban Konkle, Wayne Eastman and Tom Thyes. A Memorial Mass will be held at St. Mary Magdalene Catholic Church in Waupaca at 11 AM on Saturday, March 14th, 2020, with Father Xavier Santiago, officiating. Interment will be in the St. Nicholas Parish Cemetery in Freedom at a later date. Memorial Visitation will be held Saturday, March 14th from 9:30 AM until the time of the service at the church. A memorial was established in Lee's name to St. Mary Magdalene's.

Ignatius L. "Lee" Kabat, age 88, of Waupaca, WI, passed away on Friday, January 31st, 2020 at Bethany Home in Waupaca. He was born in Green Bay, WI on March 25, 1931, a son of the late Bernard and Irene (Heimerl) Kabat. He married Joan Gerritts... View Obituary & Service Information

The family of Ignatius "Lee" Kabat created this Life Tributes page to make it easy to share your memories.

Send flowers to the Kabat family.