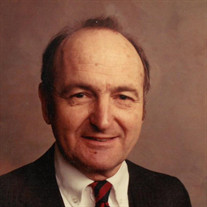 Jack H. Eiche age 94 of Waupaca, passed away peacefully at his home. Jack was born on October 9, 1927, the son of Melvin and Elizabeth (Munhall) Eiche. Jack married Candice Wagner Wallace on October 15, 1988 in La Crosse, WI and married Marjorie Dickoff on June 30, 1951 in Marshfield, WI. Jack was a WWII Veteran in the U.S. Navy, a 1950 University of Wisconsin-Madison graduate in Mechanical Engineering, a private airplane pilot, and a member of Immanuel Evangelical Lutheran Church, Waupaca Historical Society, and Waupaca Country Club. Jack enjoyed fishing, duck hunting and golf. Jack is survived by his loving wife Candice Eiche of Waupaca, WI; his son William Eiche of Cudahy, WI; his daughter Elizabeth Eiche of Milwaukee, WI; his sister Catherine McDougal of Deerwood, MN; his sisters-in-law Sandra Eiche of Minneapolis, MN and Pat (Joe) Paider of Weyauwega, WI; his brother-in-law Richard (Kathy) Wagner of Weyauwega, WI, many nieces, nephews other relatives and friends. Jack was preceded in death by his parents Melvin and Elizabeth Eiche; his son Steven Eiche; brother William Eiche; brothers-in-law James McDougal and Thomas Wagner and sister-in-law Deborah Wagner. A Christian funeral service will be held on Friday June 10, 2022 at 11 A.M. at the Immanuel Evangelical Lutheran Church in Waupaca, WI, Pastor Ron Siemers and Pastor Ben Kempfert will officiate. A visitation will be held on Friday June 10, 2022 from 10 A.M. until the time of the service at 11 A.M. at the church. Burial of cremains will take place at Lakeside Memorial Park. The Holly Funeral Home of Waupaca is assisting the family with arrangements.

The family of Jack H. Eiche created this Life Tributes page to make it easy to share your memories.

Jack H. Eiche age 94 of Waupaca, passed away peacefully at his...