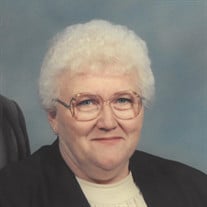 Jaclyn (Jackie) Ruth Lemke was born in Rock Island, Illinois on August 27, 1934 to Ruth, and Harold Fix. Jaclyn later moved to Almond with her family. She passed away peacefully in her sleep on Tuesday, September 24 2019, at Ascension St. Michaels’s hospital in Stevens Point, WI. Jaclyn was a lifelong member of the St. John’s Lutheran church in Almond, where she played piano and organ; also assisted with the music for Sunday school. Jaclyn worked for the Union State bank/ F&M for nearly 50 years, until she retired and became The Village of Almond clerk. After she left the village, she spent her free time reading, calling relatives to keep in touch, playing solitaire and loved to play the accordion for her family. She loved talking about newspaper articles, and school newsletters to keep up with events, and other projects at the school. Jaclyn married William (Bill) Lemke on April 18, 1953. They were married for 48 years until Bill passed away on April 21, 2002. She is further survived by her daughter Carla (Darrel) Potts, and Son Kevin (Susan) Lemke; Grandchildren: Valerie (Ken) Gendusa, Natalie Potts, Jeremy (Robyn) Potts, Matthew (Erin) Lemke and Amanda (John) Ruzicka. Her great grandchildren: Gabrielle, and Katrina Gendusa; Braden, Madalyn, and Darron Potts; Maxwell, and Paige Lemke; and Clayton, and Cody Ruzicka. Her sisters, Velva (Bob) Brusse of Oostburg, WI. Dannielle Manock of Almond, WI. In addition to all close family and friends that always visited, and shared time with Jaclyn. She is preceded in death by; her parents, Ruth and Harold Fix; Her husband William; her mother and father in-law Max, and Ameilia Lemke; Additional family members Karen (Bob) Gottschall; Zaida Thompson; Jesse Thompson; Dorthy (Don) King; Fred (Louise) Lemke; Joe (Lois) Lemke; and Keith Manock. A funeral service will be held on Tuesday October 1, 2019 at 11 A.M. at St. John’s Lutheran Church in Almond with burial at East German Methodist Cemetery. Reverend Brian Roehrborn will officiate. A visitation will be held on Monday September 30, 2019 from 4 until 7 P.M. at St. John’s Lutheran Church in Almond and again on Tuesday from 10 A.M. until the time of the service at 11 A.M. at church.

Jaclyn (Jackie) Ruth Lemke was born in Rock Island, Illinois on August 27, 1934 to Ruth, and Harold Fix. Jaclyn later moved to Almond with her family. She passed away peacefully in her sleep on Tuesday, September 24 2019, at Ascension St. Michaels&#8217;s... View Obituary & Service Information

The family of Jaclyn R. Lemke created this Life Tributes page to make it easy to share your memories.

Send flowers to the Lemke family.