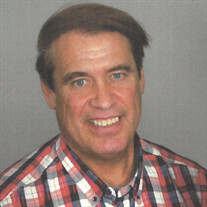 James (Jim) William Borski was granted eternal rest on November 15, 2020 with his wife and daughters by his side. He was born December 7, 1959 to Michael Borski and Grace (Bialek) Borski in Elgin, IL. Jim attended elementary school in Stevens Point, PJ Jacobs Junior High and SPASH. He graduated in 1977 and briefly attended UW-Stevens Point while working in the mail room at Sentry Insurance. His lifetime career at Americold, Plover began in 1979 where he eventually became the warehouse supervisor and then operations manager for Plover, Babcock and Tomah freezer storage warehouses. He married Cynthia (Cindi) Adamski on July 5, 1980 at St. Mary of Mount Carmel, Fancher. They were married 40 years and shared the joy of being parents to Amanda Motiff-Borski and Kendra Borski. Both daughters attended Tomorrow River schools in Amherst. Jim attended Midstate Technical College during his career at Americold when he attained a degree in business management. Jim joined the Knights of Columbus as a parishioner at St. Bronislava, Plover. For most of the 25 years as a member at St. Bron’s he served as an usher. He became a 4th Degree Member of the Knights of Columbus in 2011. He retired in 2014 after 35 years of service. Upon his retirement he worked part-time as a security guard for AIG Travel Guard and for Sentry Insurance. As a young man, Jim enjoyed wrestling for the SPASH Varsity Teams, hunting, and playing horseshoes. He assisted Cindi as a chaperone on several trips to Germany and as a host to German teachers in their home. He always enjoyed chatting at length whenever he met up with an acquaintance in a store. He watched each and every Packer game, often with his girls. Jim and Cindi were able to travel extensively while compiling countless memories of trips to Alaska, Hawaii, Mexico, the Bahamas, Venezuela, and nearly every spring break to Florida. He is survived by his wife Cindi; his daughters: Amanda (Matt) Motiff-Borski , Kendra (Mitch Wolding) Borski; his mother: Grace Borski; his siblings: Bob (Terri) Borski, Joanne Borski, Patty (Ed) Ferg, Mike (Linda) Borski, Barb (Mark) Hanson, Scott Borski, Laurie (Tom) Gerrits; Cindi’s siblings: Gerald (Gary) Adamski, Kenneth (Jackie) Adamski, Chris (Cristy) Adamski and Lori (Peter) Barsness and many special nieces , nephews, aunts, uncles and cousins. He is preceded in death by his brother-in-law, Mark Adamski and sisters-in-law, Gail Adamski (Firkus Yauck) and Darlene Adamski. He is also preceded by his father, Michael Borski Sr., father-in-law, Carl Adamski and mother-in-law, Barb Adamski as well as beloved uncles, aunts and cousins. Jim was a dedicated son-in-law and shared his time, and wife Cindi, most of the past decade as they cared for her ill parents. A mass of Christian Burial will be held on Saturday, November 21 at 10:00 a.m. at St. Mary of Mt. Carmel Catholic Church with a visitation at Jungers-Holly Funeral Home in Amherst on Friday, November 20 from 4 pm-8pm. Cindi would like to thank all the siblings and friends who made special visits during his final days and those who prayed throughout his journey. Holly Funeral Home wants to remind the public of wearing mask and physical distancing will be observed. Jim’s unfailing faith in God carried him through struggles especially with illness and brought him Joy during the many blessed times. John 14:2 ”In My Father’s house are many rooms”. It will not matter how large or small the room is, Jim will fill it with his signature smile. Online condolences available at www.hollyfuneralhome.com

James (Jim) William Borski was granted eternal rest on November 15, 2020 with his wife and daughters by his side. He was born December 7, 1959 to Michael Borski and Grace (Bialek) Borski in Elgin, IL. Jim attended elementary school in Stevens... View Obituary & Service Information

The family of James "Jim" W. Borski created this Life Tributes page to make it easy to share your memories.

Send flowers to the Borski family.