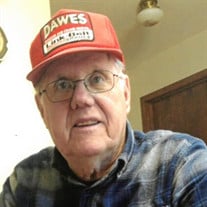 James “Jim” Chester Kubisiak, age 85 of Amherst, WI passed away on Monday, July 5, 2021. Jim was born on the 12th day of the 12th month in 1935, the twelfth child of Theodore and Katherine (Glodowski) Kubisiak. Jim was raised on their family farm near Amherst. He received his elementary education at the Black Oak Grove one-room schoolhouse — the last remaining member of the last class taught there. From there he continued his education at St Mary of Mount Carmel Catholic School at Fancher, and graduated from Amherst High School in 1953. Jim served his country in the U.S. Army during the Korean Effort Conflict, where he was stationed in the Occupational Forces in Germany. He returned to Wisconsin and was employed by various businesses near Milwaukee, eventually returning to the area where he retired after working several years for Wisconsin Public Service in Plover. Jim was a member of St Mary of Mount Carmel Catholic Church at Fancher. He enjoyed the wildlife near his home, especially the birds who entertained him outside his window. He thoroughly enjoyed the company of his pets, Tigger and Bonzai who were his constant companions over the years. He enjoyed listening to music, especially polkas, which he occasionally played along with on his concertina and button accordion. He is survived by one sister, Anne (Ken) Dachyk of Stevens Point and numerous nieces and nephews. Jim was preceded in death by his parents, his Godfather Right Reverend Monsignor Chester A. Ropella, his three brothers Victor, Lawrence, and Albert, and seven sisters Loretta Kosinski, Evelyn Konkol, Caroline Augustine, Marie Timmers, Katherine Konkol, Stella Cieslewicz, Genevieve Trzebiatowski and their spouses. A very special thank you to the Heartland Hospice unit, as well as the staff at Grand Army Home in King for their wonderful compassionate care during his last months. A Memorial Mass will be held at 11:00 AM on Saturday, August 7, 2021 at St. Mary of Mount Carmel Catholic Church-Fancher. Visitation will be held from 10:00 AM until time of service at the Church. Jungers-Holly Funeral Home of Amherst is assisting the family with arrangements. Online condolences available at www.hollyfuneralhome.com

The family of James "Jim" C. Kubisiak created this Life Tributes page to make it easy to share your memories.

Send flowers to the Kubisiak family.