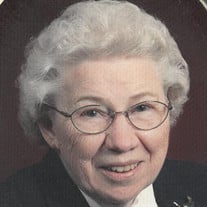 Jane M. Wahl, age 88, of Amherst, WI, passed away on Tuesday, March 23rd, 2021 at North Haven Assisted Living in Stevens Point, WI. She was born in Elderon, WI on September 16, 1932, a daughter of the late Albert and Eunice (Johnson) Olsen. Jane's first marriage was to Jess Torres. He preceded her in death on May 26, 1971. She later married Richard Wahl. He preceded her in death on July 5, 2003. Jane was a member of Nelsonville Lutheran Church. She was also involved with TRACK, Forrester and Sons of Norway. She enjoyed cross country skiing and loved animals. Survivors include her Sons: Michael Torres, Amherst, WI; Anthony Torres, Genoa, IL; Grandchildren: Tina Torres, Rockford, IL; Joseph Torres, Rockford, IL; Jason Torres, Rockford, IL; Brother: Richard (Ruthie) Olsen, Wittenberg, WI; Sisters-in-law: Vera Torres, Fostoria, OH; Josephine Gaetano, Woodale, IL. She is also survived by nieces, nephews, other relatives and friends. Jane was preceded in death by her parents, Albert and Eunice Olsen; her first husband, Jess Torres; her second husband, Richard Wahl; a grandson, Justin Torres; and two sisters, Shirley Gormley and Phyllis Shatters. A Memorial Service will be held at the Jungers-Holly Funeral Home in Amherst at 11 AM on Saturday, March 27th, 2021, with Reverend Gretchen Anderson, officiating. Burial will be held at Nelsonville Lutheran Cemetery, Town of New Hope, Portage Co., WI at a later date. Memorial Visitation will be held on Saturday, from 10 AM until the time of the service at the funeral home. Jungers-Holly Funeral Home would like to remind the public that no more than 50 people will be allowed in the funeral home at one time with wearing of masks and social distancing observed.

The family of Jane M. Wahl created this Life Tributes page to make it easy to share your memories.

Send flowers to the Wahl family.