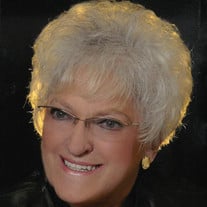 Janet Marjorie Allen, age 87 of Poy Sippi, WI passed away on Monday, January 10, 2022 at her residence. Janet was born on December 3, 1934 in Berlin, WI; daughter of the late Herman and Theresa (Behm) Pagel. After graduating High School in 1952, she worked at the Berlin Telephone Company. On March 19, 1955, she married Jack Allen in Poy Sippi, WI; he preceded her in death on January 30, 2007. Janet worked at Daisy Dairy in Poy Sippi and mowed the lawn at the Poy Sippi Cemetery, she also worked at the Wisconsin Veterans Home in King for 25 years until her retirement in March of 1997. Janet was a faithful member of Emmaus Lutheran Church, and active with the ladies making quilts to send overseas. She enjoyed volunteering at the Second Time Around Store in Berlin, going to Silvercryst in Wautoma for her lobster and going to do her sign ins at various places, she was a “spit fire” that had to have her sparkles. Janet also loved her sweets and enjoyed baking. But most of all she was proud of her family and loved spending time with them all. Janet is survived by her children, Cheryl Flanigan of Berlin, WI; Debbie (Jeff) Spritka of Berlin, WI; Lori (Steve Frank) Janes of Omro, WI; Jerry Allen of Berlin, WI; 10 grandchildren; 22 great-grandchildren; 2 great-great-grandchildren; sister-in-law, Ann Pagel; many nieces, nephews, other relatives and friends. Janet was preceded in death by her parents, husband, Jack; son, Ricky Allen; two granddaughters, Kelly Jo Spritka and Trina Krause; great-grandson, Ethan Haese; four sisters and two brothers. Funeral Service will be held at 11:00 AM on Thursday, January 20th at Emmaus Lutheran Church – Missouri Synod in Poy Sippi. Rev. Bryan Fritsch will officiate. Visitation will be held from 4-7 PM on Wednesday, January 19th at the Emmaus Lutheran Church and again on Thursday from 10:00 AM until time of services at the Church. Burial will follow at Poy Sippi Cemetery. Holly Funeral Home of Waupaca is assisting the family with arrangements. Online condolences available at www.hollyfuneralhome.com

Janet Marjorie Allen, age 87 of Poy Sippi, WI passed away on Monday, January 10, 2022 at her residence. Janet was born on December 3, 1934 in Berlin, WI; daughter of the late Herman and Theresa (Behm) Pagel. After graduating High School in 1952,... View Obituary & Service Information

The family of Janet M. Allen created this Life Tributes page to make it easy to share your memories.

Send flowers to the Allen family.