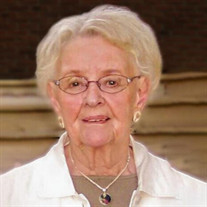 Shortly before dawn on Monday, December 7, 2020, Pearl Harbor Day, a day of significance to her and her generation, and moreso now to her family, the woman known as Mom, Jean, Aunt Jean, and Grammer laid down to rest one last time before quietly and peacefully joining the love of her life, “The One”, Bob, somewhere beyond this world. Jean Marie Donaldson, 94, was born February 9, 1926 in Owatonna, MN. She was lovingly raised in the city of Minneapolis, Minnesota by her doting parents, Eugene and Martha Nugent. Her childhood was filled with travel and books, both life-long interests she passed on to each of her six children. After graduating from Southwest High School in Minneapolis in 1943, she attended the University of Minnesota and then St. Catherine’s, majoring in Library Science, prior to meeting her future husband. In the summer of 1946, at her cottage on Lake Wissota, and by arrangement of some meddling aunts, she was introduced to Robert Donaldson. Within months they were engaged and then married on May 24, 1947 in Eau Claire, Wisconsin. As years passed, Bob and Jean shared their lives and family with their wedding witnesses, Bob’s only sister and her husband, Barbara and Joseph Abboud. While Bob finished his education at the University of Wisconsin - Madison, they made their home in the WWII living facilities, “trailer camps”, near the grounds of what is now Camp Randall. In 1948 they welcomed the first of their six children. After Bob’s graduation and the birth of their second child in 1949, the family made several moves throughout the country, including Nebraska, North Dakota, and back to Neenah, Wisconsin for the birth of their third child in 1951. The family of five then moved to Niagara Falls before returning again to Wisconsin in 1954 for one more change of employment for Bob, making the move to Waupaca, Wisconsin, the city in which they would spend their remaining years together. It was in Waupaca where, with the births of three additional children, they completed the large family that Jean had always wanted. “Well, I kept getting pregnant. I couldn’t help it. I was happy.” Jean was an avid reader, believing that a day of reading may not be the best day, but a lifetime of reading makes for a wonderful life. Raised a city girl, she adapted to being part of Bob’s passions for camping and backpacking, often in the three-seated station wagon with two car-top carriers atop the roof for the annual summer road trip to Montana and Wyoming....all with a carload of six and sometimes seven kids when her beloved nephew joined the crew. While the children were young she was a stay-at-home mom, but later worked with Bob doing bookwork for his business, Dons’ Construction. She was a member of the Waupaca Library Board, a proud volunteer for Meals on Wheels with her close friend Cleo, and a busy knitter for the Christmas at Sea scarf project. Over the years she and Bob enjoyed the companionship of a succession of dogs, her last being Jake. Throughout her life Jean enjoyed playing bridge and Scrabble, tuning into Jeopardy, watching Badger football, the Brew Crew, and most especially the Green Bay Packers. As a Packer shareholder, she was also a distinguished member of the “I Was At The Ice Bowl Club”. She looked forward each week to getting her hair done by her loyal stylists, Barb and Judy, followed by lunch at Three Squares Restaurant. In later years she shared her love of chocolate with her children and grandchildren by baking her always-at-the-ready brownies. Having been raised an only child, Jean was happiest when surrounded by her ever-growing family. Her greatest joy and most important roles were that of a mother, grandmother, and, most recently great-grandmother. Her most difficult days were those that were caused by the isolation imposed by these most trying times. Grammer is survived by her children Cath & John Sheski of Madison, WI, Patty & Mitch Cohen of Verona, WI, Gary (b. 1951 d. 2018) & Nancy Donaldson of Bayside, WI, Barb & Roger Larsen of Stevens Point, WI, Tom & Penny Donaldson of Waupaca, WI, and Janet & Steve Larsen of Menomonee Falls, WI; her nephew and his family, Jeff & Sue Abboud of Eau Claire, WI and Joe, Morgan, Emma & Lily Abboud of Brooklyn Park, MN; her beloved grandchildren Brynna & Marco Larsen of Bonn, Germany, Dacia Donaldson of West Bend, WI, Dane Larsen of Brazil, IN, Heidi & Dusty Schwartz of St. Louis Park, MN, Paige Donaldson & Jeff Fiala of Milwaukee, WI, Kalli & Todd Suhs of Waupaca, WI, Jack Larsen & Dana Landem of Milwaukee, WI, and Roberta Donaldson & Chris DeCleene of Denver, CO; and her most recent jewels, her great-grandchildren Finya & Cora Larsen, Bonn, Germany, Evelyn & Clayton Suhs, Waupaca, WI, and Weston Schwartz, St. Louis Park, MN. She was preceded in death by Bob, her husband of nearly 48 years, her son Gary, her parents Eugene and Martha Nugent, Bob’s parents George and Hazel Donaldson, and Joseph and Barbara Abboud. Jean’s family would like to extend their deepest gratitude to the staff of Park Vista for their patient and attentive care for her these last seven months, with special recognition and sincere appreciation of Jessica and Jennifer, and an extra thank you to Josh, as well as special thanks to Erica and Holly Funeral Home. In her memory, “Be Mom” and read a child a book, make a donation to a charity of your choice, or donate to a favorite of her’s, St. Jude’s Hospital. Good Wife, Good Mom, Good Life. Good Luck. To See....Forever.

Shortly before dawn on Monday, December 7, 2020, Pearl Harbor Day, a day of significance to her and her generation, and moreso now to her family, the woman known as Mom, Jean, Aunt Jean, and Grammer laid down to rest one last time before quietly... View Obituary & Service Information

The family of Jean M. Donaldson created this Life Tributes page to make it easy to share your memories.

Send flowers to the Donaldson family.