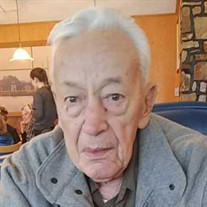 Jerome M. Kowaleski, age 91, of Wild Rose, WI, received Eternal Life on Saturday, November 20, 2021 at Thedacare Medical Center in Wild Rose. He was born on September 21, 1930 in Wild Rose, WI, son of Charles and Katherine (Jielinski) Kowaleski. Jerome was a US Army Veteran of the Korean War and served in the occupation of Germany after WWII, where he met his German wife, Anna Marie Lindner and they were married on January 7, 1954. He re-enlisted in the Army National Guard in 1979 with the 13th Evac. Hospital in Madison, WI and served an additional 11 years until his discharge in 1990 due to the Gulf War. Jerome and Maria raised their children in Wild Rose, where he was the postmaster for 31 years. He enjoyed his accordion, smoking his pipe, going to the casino, gardening, barbequing chicken on Sunday, enjoying a beer, and becoming a snowbird each winter and visiting his daughter in Florida. Jerome was a faithful Christian, loving husband, father and grandfather (his grandchildren always called him Opi as did many others). He was a friend and mentor to his family and many friends. Jerome is survived by one son, Jerome Kowaleski Jr. of Greensboro, NC; two daughters, Karyn (Robert Jason) Kowaleski of Cape Coral, FL and Suzanne (Kowaleski) Schiesel of Menomonee Falls, WI and her children, Anastasia (Stacie) Schiesel of Fredonia, WI and Jamie Schiesel of Cedarburg, WI; one brother, Denis Kowaleski of Waupaca, WI; two sisters-in-law, Diana Kowaleski of Stevens Point, WI and Natalie Kowaleski of Wild Rose, WI; and numerous nieces, nephews and cousins. Besides his parents and wife; Jerome was preceded in death by an infant daughter Theresa Kowaleski; one grandson Matthew Kowaleski; one daughter-in-law Peggy (Maurer) Kowaleski; four brothers Casey (Donna) Kowaleski, Adrian (Barbara) Kowaleski, Ronald Kowaleski and Tony Kowaleski; and sister-in-law Judi Kowaleski. A Memorial Mass will be on Saturday, December 4, 2021 at 11:30 a.m. at St. Maximilian Kolbe Catholic Church, 8611 Highway 54, Almond, WI 54909 with Father Peter Manickam presiding. A visitation will be held on Saturday morning from 10:00 am until the time of services at the church. Burial of cremains will be in Hope Cemetery in the Town of Belmont, WI will be on Monday, December 6, 2021 at 11:00 am. The Holly Funeral Home of Wild Rose, WI assisted the family with arrangements. Holly Funeral Home 630 County Road G&H Wild Rose, WI 54984

The family of Jerome M. Kowaleski created this Life Tributes page to make it easy to share your memories.

Send flowers to the Kowaleski family.