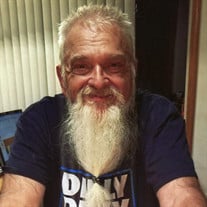 Jerry A. Brickey, age 70, of Weyauwega, WI, passed away with his family by his side on Monday, December 9, 2019 at Bethany Home in Waupaca, WI. He was born August 15, 1949 in Waupaca, WI; son of Howard Brickey and Kathryn (Anklam) Howe. Jerry served in the U.S. Army from December 23, 1969 – February 19, 1970. On January 28, 1989, Jerry married Lori A. Lucht at First Presbyterian Church in Weyauwega, WI. He spent most of his career working construction throughout Waupaca County, but also had several other jobs including Hillshire Foods and Waupaca Taxi where he made many lifelong friends. Jerry enjoyed fishing, woodworking, traveling, going on casino trips with Lori, and mostly spending time with his grandchildren. He will be dearly missed by all of his loving family and friends. Jerry is survived by his wife, Lori Brickey of Weyauwega, WI; four children, Eric (girlfriend, Kayla Vauthier) Brickey of Weyauwega, WI, Amanda (fiancé, Jon Herzfeldt) Brickey of Hortonville, WI, children from a previous marriage, Lisa Castillo of Appleton, WI, and Brian (Jen) Brickey of Manawa, WI; seven grandchildren, Alayna Brickey, Serenity Rhode, Corbin Brickey, Ivy Williams, Adrian Castillo, Jacob Brickey, and Emma Brickey; and many other relatives and friends. He was preceded in death by his father, Howard Brickey; his mother and step-father, Kathryn (Elmer) Howe; an infant daughter, Rebecca Brickey; two half sisters, Patricia Howe and Barbara Durrant; and his parents-in-law, Frederick and Lila Lucht. A Memorial Service will be on Saturday, December 14, 2019 at 12:00 Noon at the Holly Funeral Home in Waupaca, WI. Reverend Andy Behrendt will officiate. A visitation will be held on Saturday from 10:00 AM – 12:00 PM at the Holly Funeral Home. Burial will take place at a later date at the Central WI Veterans Memorial Cemetery in King, WI. The Holly Funeral Home of Waupaca is assisting the family with arrangements.

Jerry A. Brickey, age 70, of Weyauwega, WI, passed away with his family by his side on Monday, December 9, 2019 at Bethany Home in Waupaca, WI. He was born August 15, 1949 in Waupaca, WI; son of Howard Brickey and Kathryn (Anklam) Howe. Jerry... View Obituary & Service Information

The family of Jerry A. Brickey created this Life Tributes page to make it easy to share your memories.

Send flowers to the Brickey family.