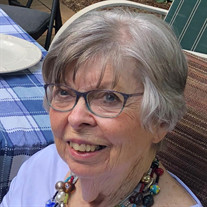 Joan Ryan surrounded herself with the things that make life special: family, lovable pets, good company and purposeful work helping others. Born in Springfield, Illinois in 1936, she was the only child of Elizabeth “Billie” and Joseph Blackstone. Following the untimely death of her father when she was 3 years old, young Joan moved to Rockford, IL with her mother, where they were taken in by family through her high school years. Joan attended the University of Iowa School of Nursing. There, she met a young medical student who became the love of her life and partner Tom Ryan. They were married for 54 years, most of which were spent in Appleton. Joan is survived by children Elizabeth (Michael) Panzer of Appleton, Martha (Kevin) Ryan-Toye of Oak Park, IL, Tom (Maren) Ryan and Charles (Jessica) Ryan, of Minneapolis MN. She was known as Miggy to her many grandchildren: Ryan (Annie), Mari (Nate) and Sam Panzer; Connor (Sofi), Brendan and Eamon Toye; Elise, Cate and Patrick Ryan; and Lucas Combs) as well as two great-grandchildren, Billie Card and Alice Panzer. As an active community volunteer throughout her life, Joan played key roles in Kings Daughters, Meals on Wheels, and was the Volunteer Coordinator of Appleton’s first Hospice. Joan loved life like few others, and she showed it every day. She made it to every school play, game, concert or ceremony and created a warm home — always with room for one more friend, exchange student or visitor. In retirement Joan and Tom split their time between Appleton and the Waupaca Chain O’Lakes where they enjoyed booze cruises, Nine and Dine (and any golf opportunity) at the Waupaca country club, cards, Sailing Club, long bicycle rides on country roads, and being active in St Mark’s Episcopal Church. She spent her final years as a thriving resident of Touchmark Retirement Community, brightening the dining room with her smile, and elevating the status of the in-house theater, Mexican train dominoes, and bridge club. Joan instilled in her children and all those around her a love and dedication to family, furry pets, and community. This legacy lives on in her children, grandchildren, and all who were fortunate to know her. The family extends its gratitude to the wonderful staff at Touchmark, who guided all of us gently through the phases of her physical decline and peaceful passing. Contributions may be made in memory of Joan Ryan to the Dr. Thomas A. Ryan Family Scholarship Fund. Checks made payable to the Community Foundation for the Fox Valley Region with Dr. Thomas A. Ryan Family Scholarship Fund in memo line can be sent to 4455 W. Lawrence St., Appleton, WI 54914. (cffoxvalley.org). For the past three years, this fund has provided scholarships to graduates of Appleton West High School intending to pursue health-oriented education. Visitation will be held Friday March 13, from 4-6pm at Holly Funeral Home, Main Street, Waupaca. Funeral Service will be held at 11:00 AM on Saturday, March 14 at St Mark’s Episcopal Church on Main Street in Waupaca. Visitation will also be held at 10:00 am until time of service at the church. Burial to follow at the Barton Cemetery in Farmington, where she will be laid to rest next to her late husband, Tom.

Joan Ryan surrounded herself with the things that make life special: family, lovable pets, good company and purposeful work helping others. Born in Springfield, Illinois in 1936, she was the only child of Elizabeth &#8220;Billie&#8221; and Joseph... View Obituary & Service Information

The family of Joan L. Ryan created this Life Tributes page to make it easy to share your memories.

Joan Ryan surrounded herself with the things that make life special:...

Send flowers to the Ryan family.